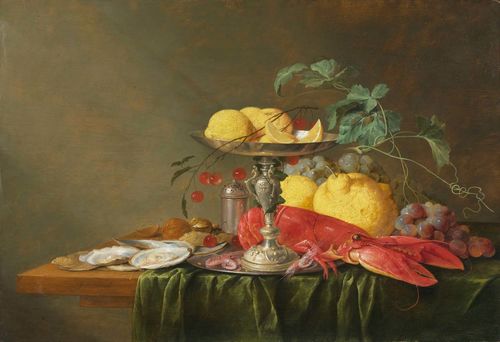 This superb still life of monumental size is dated by Fred G. Meijer to Jan Davidsz de Heem's initial, highly productive creative phase in Antwerp, which spans the period from 1636 to the late 1650s. He compares the painting stylistically with de Heem's signed and dated still life of 1645; however, he believes that the composition could also be of slightly earlier origin, around 1642/43. Jan Davidsz de Heem, one of the most important and influential Dutch still life painters of the 17th century, was born in 1606 in Utrecht, a city with a flourishing tradition of still life painting distinguished by Ambrosius Bosschaert (1573-1621), Roelandt Savery (1576-1639), and Balthasar van der Ast (1593-1657). In 1626 de Heem took up residence in Leiden, where he worked in the style of Balthasar van der Ast. The influence of the Haarlem still life painter Pieter Claesz (c. 1597-1660) is also evident in de Heem's early work. Some time later, de Heem settled in the Habsburg-controlled Southern Netherlands, where he is recorded in the Antwerp Guild of St. Luke in 1635/36. While his painting style was first inspired by Jan Brueghel the Elder (1568-1625) and Daniel Seghers (1590-1661), he develops there a manner more in accord with Flemish taste, featuring his characteristically opulent large format still lifes that would define his later oeuvre. The still life offered here was executed in this early creative period and shows a table, two-thirds of which is draped with a sumptuous green cloth; open oysters, walnuts and prawns on a silver plate; as well as lemons in a silver tazza, a lobster, grapes with vine leaves, and a branch of cherries. The chosen pyramidal composition dominates the right half of the picture and captivates through the brilliant colouring of the individual elements as well as the differentiation of various materials. The monochromatic and simplified design in the picture's left half is a soothing complement to the opulent still life composition and creates an impressive tension. Fred G. Meijer includes the picture in a forthcoming catalogue raisonné of Jan Davidsz de Heem's paintings. It is archived in the RKD, The Hague, as an autograph painting by the artist.

Sold for CHF 940 000 (including buyer’s premium)
All information is subject to change.