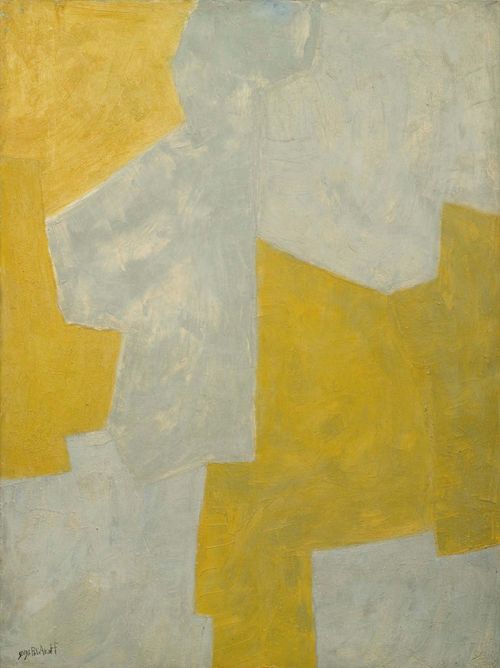 Serge Poliakoff, the Russian-French artist, settles in Paris in 1923 and devotes himself for a time to making a name as a musician (classical guitarist), and comes through his friendship with Kandinsky and later with the married couple Sonia und Robert Delaunay to his own formal and pictorial language. From the beginning of Poliakoff’s work colour is separated from a descriptive (representational) function: colour stands for, as in Delauney’s Orphism, dynamism and emotion. After his initial studies in Paris beginning in 1927, Poliakoff attends the Slade School of Art in London for two years and in 1937 returns to Paris. Not long afterwards he arrives at his distinctive compositional technique. Soon emerging are the characteristic “Farb-Flächenbilder”, his "colour chords". As a skilled musician, he knows this principle of music composition theory: while in Polyphony the musical texture of a composition is determined by adjacent, independent parts; the chords accompanying the principal voice are subordinate in Homophony. Poliakoff shows his acquaintance with both principles in his paintings. In the early 50s emerge the first purely monochromatic works, with colour fields restricted to the shades of a single colour. But at the same time Poliakoff experiments with the juxtaposition of many different, self-contained colour fields for a sensual, almost wild chromaticism. In the present work, "Gris et Jaune" of 1962, both compositional techniques described above are juxtaposed. The dialogue of the two colours is the overtly visible principle of this work. The somewhat subdued monochrome yellow is in dialogue with the whimsical cloudy grey: the complementary colour field. The boundaries of the two colours are not, as so often with Poliakoff, strictly disjunctive, but flow gently into each other. It is no exaggeration to describe Poliakoff as an artist who makes with colours pure, abstract "music". In 1959 and 1964 Poliakoff is invited to "documenta" 2 and 3 in Kassel. In 1965 he won the top prize at the Tokyo Biennial and he is thus considered one of the leaders of classical modernism. He died in 1969 in Paris, officially at the age of 63. According to the latest research, however, Poliakoff was born in 1900 in Moscow. The legend of his 1906 birth year he himself has never refuted.

Sold for CHF 204 000 (including buyer’s premium)
All information is subject to change.