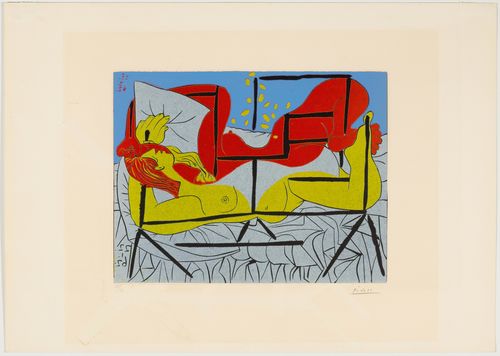 In his works, Pablo Picasso turned repeatedly to Greek mythology. In the "Suite Vollard" from the 1930s, the Minotaur appears, the Faun is a recurring motif – also in the ceramics - , the Bacchanal is featured in numerous linocuts, and in the present work he takes on the story of "Danae", who was tempted by Zeus in the form of a shower of gold. In a total of four states, Picasso experimented with various types of colouring, which give each sheet its particular expression, so that the present fourth state impresses with its most sophisticated colouring.

Picasso's preeminent skill in the field of printing culminates in his superior and yet bold handling of forgotten printing techniques. So states Felix Brunner: "Not so long ago a publisher would have been hard pushed to show a compelling example of a linocut. Now Pablo Picasso has produced an entire series of fine, multi-coloured linocuts." (Brunner, Felix: Handbuch der Druckgraphik, Teufen 1964, p. 50). Linocuts, within the field of colour printing techniques, have the great advantage that the artist does not need different plates for different colours (as would be the case for example with colour woodcuts), but works with just one plate, which is altered with each stage of printing. To begin with, a light rectangle is printed using the uncut, inked lino plate; then it is cut and printed with a somewhat darker colour. This process is repeated until the definitive work is produced. "The genius of being limited to one plate, means that he prevents the image from disintegrating into its individual colours, and at the same time avoids the forms being copied." (ibid, p. 311).

Sold for CHF 66 500 (including buyer’s premium)
All information is subject to change.