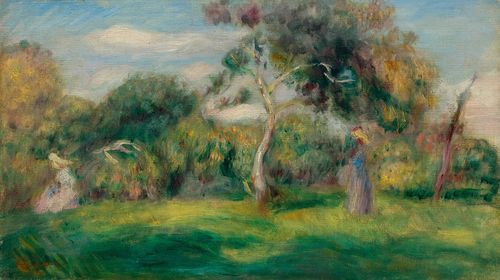 Provenance:
- Estate of the artist.
- Durand-Ruel, Paris.
- Acquired from Durand-Ruel 1959, since then private collection.

Badly afflicted by rheumatic pains, which Renoir had suffered from since the 1880s, in 1898/99 he stayed mostly in the South of France. The warm climate eased the pain, and the landscape of the various localities such as Cagnes, Grasse and Aix-les Bains inspired him to paint. The present work shows a landscape in the South of France, a subject often chosen by the artist at this time. The painting is dominated by luscious green tones. A woman stands in a clearing next to the tree in the centre, probably waiting for the woman entering at the left of the picture. The figures are situated harmoniously in the landscape, almost flowing into the surrounding scene, as Renoir always does, since for him the interplay of man and nature are very important. Although Renoir’s style changed over the years, the Impressionist was ever present in him. We can see for example the use of colour to depict the shadow and light. Despite Renoir’s illness, neither his painting nor his state of mind became heavier or more austere, but both were always accompanied by a cheerful lightness, which he retained until his death.