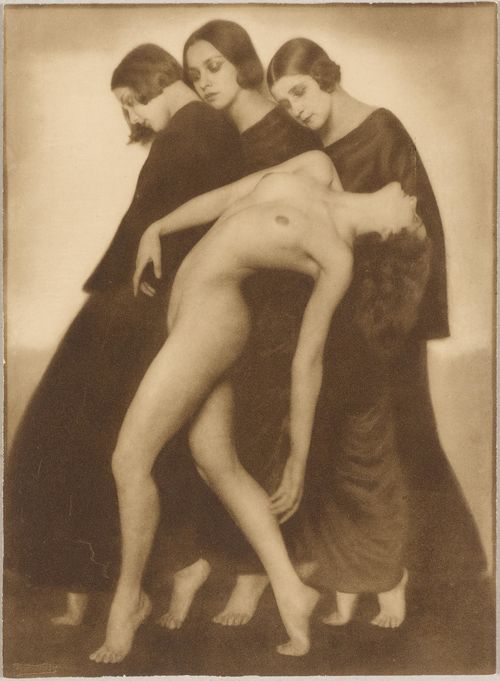 (1884-1936)
Bewegungsstudie [Movement study] (1925).
Pattern-photogravure. Original photograph. Printed around 1933.
23,1 x 17,2 cm.
Signed in the negative, lower left. Mounted on cardboard.
Faber, Monika (ed.), Rudolf Koppitz, 1884 - 1936, Cat. Historisches Museum, Wien u. a., 1995, p. 83. - Annette et Rudolf Kicken/ Simone Förster, Points of View. Masterpieces of Photography and their Stories, Göttingen, Steidl, 2007, ill. p. 127. Catalogue note: "The three women in black abducting the nude dancer can be understood as representing death [...]. In the eyes of many of [Koppitz's] contemporaries [...] this image was more likely to be interpreted as representing Vanitas. This reading did not stop anyone from purchasing this photograph [...] nor did it prevent the picture from writing photo history when it was used as the sole photographic image to illustrate the entry "art photography" in a 1920s edition of the Enyclopedia Britannica." (Points of View, pp. 124 and 125.). -

1923 Kopppitz started with his movement and figural studies, which find his culmination in this masterpiece. The image is famous for his rigorous compositional of the stylized models in the studio setting. With focous on the pronounced awareness of form and the fascinating play of light and shadow. The subjects are contingent on each other for balance, but still keep their emotional distance. -

Sold for CHF 5 250 (including buyer’s premium)
All information is subject to change.