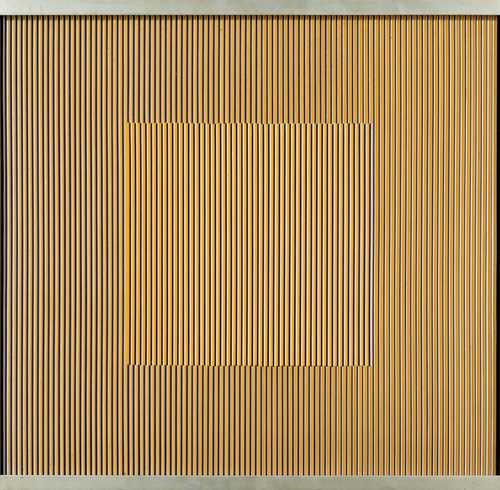 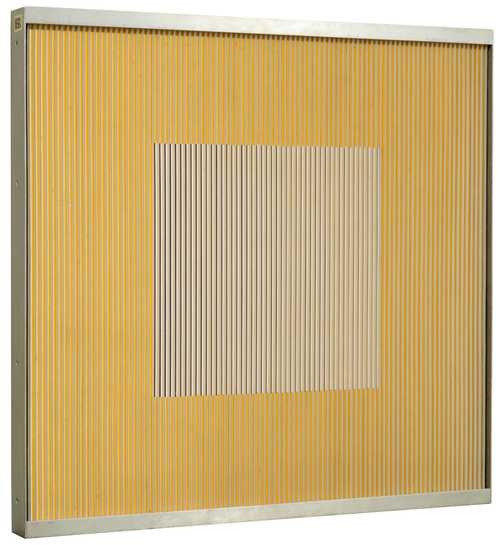 (Caracas 1923 - lives and works in Paris)
Physichromie No. 668. 1973.
Acrylic on wood and plastic.
Signed, dated, titled and with the measurements on the reverse: PHYSICHROMIE NO. 668 CRUZ-DIEZ PARIS MAI 1973 60x60 cm C.D.
60 x 60 cm (in original aluminium frame).
The Cruz-Diez Art Foundation, Paris, confirmed the work. This work is recorded there under the identification number: 21021 and will be included in the forthcoming catalogue raisonné.

Provenance:
- Purchased directly from the artist by the present owner.
- Since then private collection Switzerland.

The artist Carlos Cruz-Diez was born in 1923 in Caracas in Venezuela and studied there at the College of Fine Art between 1940 and 1945. Alongside Jésus Raphael Soto (Lot xx “Vibrations” and Lot xx “Titel”), Marcel Duchamp (Lot xx “Rotorelief Optical Discs #1 Corolles”), Jean Tinguely and Günther Uecker, he is one of the most important exponents of Kinetic Art. Kinetic Art is characterised by the aesthetics of movement in three-dimensional artworks. It seeks to create this movement through external factors such as wind, sun, electronic or mechanical motors, or by the viewer themselves. It comprises a wide variety of techniques. Although as early as the 1920s, artists such as Marcel Duchamp scrutinized mobility in art and the awareness of the instability of reality, this artistic trend was shown for the first time in the summer of 1960 at the Museum für Gestaltung in Zurich with renowned artists under the new concept of “Kinetic Art”.

Carlos Cruz-Diez’s oeuvre can be divided into 8 series, alongside numerous installations, which were made for public spaces from the 1960s onwards. The present work belongs to the series called “Physichromie”, which he designed in 1959. His Physichromies are of a pure optical nature. If the viewer stands opposite the work, they can see a symmetrical colour composition, consisting of narrow parallel painted lines. The presence of thin plexiglass slats between the lines, means that when the viewer changes position in the room, the primary colours blend. Thereby new colours appear to the viewer’s eyes, which previously were not perceptible – an optical illusion. Cruz-Diez’s Physichromies require three factors: the composition, the viewer, and the position of one in relation to the other, so that the colour nuances will vary. For Cruz-Diez colour is a reality, which affects people differently.
Carlos Cruz-Diez has created an exceptional oeuvre, seen in over 1000 public exhibitions, 286 solo shows and 142 architectural works. He has received 70 awards and his works are on show in over 60 museum collections.

Sold for CHF 126 500 (including buyer’s premium)
All information is subject to change.