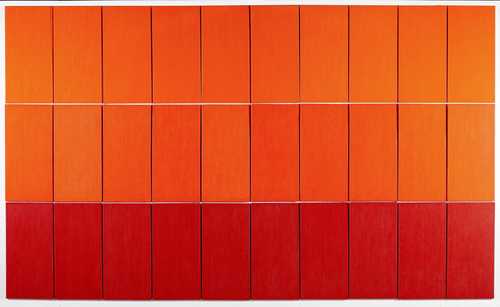 Inspired by a visit to the studio of Yves Klein in Paris in 1957, soon afterwards Bernard Aubertin also turned to monochrome painting. He chose a pulsating red as his colour and covered all nail objects and paintings with this characteristic colour. The result is fascinating monochrome works, in which the essence and multi-layered nature of the colour is expressed. Thus, the colour red encompasses an exciting dichotomy: on the one hand it stands for energy, fire, violence, blood, and on the other hand it stands for infinite clarity and power. “Through the colour red I have the feeling of identifying with fire, with this fire, which I would like to possess and which I would …(..)appropriate (…)”, postulated Aubertin in 1969 in his manifesto “triumphant fire”.

In 1960 Aubertin extended his repertoire to include the element of fire, which is the manifestation of this colour. Burnt matches, witness to the spontaneity of the flame, are arranged in sequential abstract compositions. The production process remains visible in the work, and at the same time the destructive power of the fire stands as a symbol of renewal and transformation (Lot 3417).
Bernard Aubertin discovered a further means of expression at the beginning of the 1960s – similar to Günther Uecker – using the nail as structural element. In “Tableau Clous” (Lot 3416) nails are hammered onto a square wooden panel at regular intervals and covered with a compact layer of red paint. Depending on the standpoint of the viewer and the cast of the light, the shadows of the nails alter. In addition to the relief structure, the iridescent red pigments of the paint reinforce the vibrating movement of the colour. It is not surprising that two years later in 1962, he joined the Zero movement with Heinz Mack, Otto Piene and Günter Uecker - a group who also sought expression through reduction and austerity beyond the established ways of creating form.

Red remained Aubertin’s central theme, however. The French Zero artist is le peintre du rouge et du feu. Canvas, wood, nails, clamps, iron wire have been deployed, he has torn up paper, pierced board and aluminium and covered all these structures in red. "I am seeking yet again my red" said Aubertin in 1993 on the occasion of a retrospective “Aubertin, Bernard le rouge” at the Stiftung für Konkrete Kunst in Reutlingen. If a great variety of individual works had dominated thus far, he then began to work in large series: Plein rouge, Monochromes rouges, Nouveaux rouges, Simplement rouge were produced in the following years. The serial principle and this concept of the insistent repetition of the apparently identical, are decisive in understanding the work of Aubertin. The serial work presented here, “Simplement rouge” celebrates in a progression of 30 works, a firework display of colour in three variants of red tones. Bernard Aubertin analyses the properties of red, “its power of attraction, its charm, its movement, its light, its vibration, its emotional effect, its tactile presence”. (Quoted in: Bernard Aubertin. ZERO, Exh. Cat., Martin-Gropius-Bau, Berlin/ Stedelijk Museum, Amsterdam 2015, p. 267) The monochrome canvas allows the reality of the picture to be liberated, unencumbered by line, form or composition. The colour contains its absolute value, releases its energy, and enables the viewer to immerse themselves to the full.