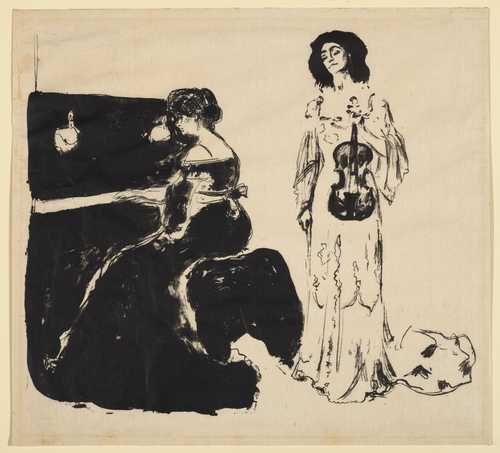 
“Art reflects not only what is apparent to the eye – it also contains an expression of the inner soul.” - Edvard Munch.

As the most important Symbolist print maker and precursor to Expressionism, Edvard Munch is one of the outstanding artists of the Classic Modern period. His oeuvre greatly influenced subsequent generations of artists. As early as the beginning of the 1880s, in his work the young painter magically and powerfully combined an emotional and expressive level, characterised by loneliness, fear, melancholy and longing for love, with an objective, aesthetic level. It was an important break from the pictorial methods of the era of naturalism, where factors such as three-dimensionality through naturalistic colours, materiality, physicality and perspective could not be omitted. Edvard Munch developed his characteristic artistic language, by turning to the subjective and seeking to express his emotional state.

Edvard Munch was born in 1863 in Løten, Norway, the son of a military doctor. When he was a year old, the family moved to Kristiania (now Oslo). He lost his mother to tuberculosis in 1868, and his eldest sister in 1877. In 1879 Munch began architecture studies at the Institute of Technology in Kristiania, which he stopped after just a year, in order to attend a drawing course at the Royal Art School, where his talent for painting caused a stir. In 1885 he travelled to Paris, where he was greatly impressed by the Impressionists and Post-Impressionists, who inspired him towards his own artistic path. In the same year, he showed his etchings publicly for the first time at Ugo Baroccio, a gallery in Berlin. Somewhat later he exhibited a series of prints “Eine Reihe von Lebensbildern” at the Berlin Sezession, as a result of which he took part in further exhibitions, and in collaboration with the gallery owner Bruno Cassirer, he successfully generated sales of his print portfolios. From 1892 to 1908 Munch lived between Paris and Berlin. In order to recuperate from his recurring nervous states and alcohol dependency, he would spend the summer months reguarly in Norway. His extensive oeuvre comprising 1006 paintings, 15 391 prints and around 4443 drawings and watercolours gave him access to a broad public. He was keen to experiment with new media including photography. Edvard Munch died at the age of 81 in 1944 in his house in Ekely.

The present lithograph “Das Geigenkonzert” (the violin concert) was produced in 1903 in Berlin, during a concert tour of the famous English violinist Evangeline Muddock (known under the stage name of Eva Mudocci) and her companion, the pianist Bella Edvard. Between the years of 1901 and 1922 the duo played concerts in London, Paris and in Scandinavia. Munch and the violinist met for the first time in 1903 in Paris; a friendly closeness and intimacy developed between them, which can be perceived in three further lithographs, which Munch made in 1903: “Die Brosche. Eva Mudocci”, “Violin Recital” and “Salome”.

The pictorial composition of the violin concert is a consummate example of Munch’s art. The left half of the picture dominates firstly with a summary, but dark and dense series of strokes, which lend volume to the piano and the garments of the pianist. Two small areas of candlelight illuminate the pianist as she plays. Conversely, the right half of the picture, with its light and delicate strokes on the stone, gives way to the white space and fills it. Immersed in contentedness, attachment and calm, the distinguished violinist awaits her cue. This gives rise to a wonderful, expressionist tension between the two contrasting and yet interdependent poles, which together produce a complete, harmonious, acoustic and visual ensemble. In this work, Munch achieves superbly, in Expressionistic terms, the stylisation and abstraction of the two motifs as symbols of different feelings and moods.