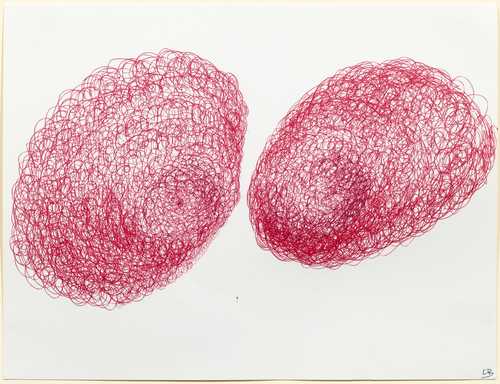 Provenance:
- Gallery Peter Blum, New York (verso with the label).
- Purchased from the above by the present owner in 1998, since then private collection Switzerland.

“What is crucial, which our entire self-image is attempting to understand, is who we are, and to scrutinize ourselves. Art can help to that end.”
(Quote in: Rainer Crone/Petrus G. Schaesber: Louise Bourgeois 1988. Das Geheimnis der Zelle. München 1998, p. 105)

Louise Bourgeois has given her drawings ambiguous titles - 'Pensées plumes' – feather-light thoughts or ideas, which she brings to paper with the pen (quill pen). Her creativity and energy, opposites and unity, come to light palpably in her drawings. Bourgeois often works at her drawings in bed during sleepless nights and has even called an important cycle of drawings "Insomnia" (1994-95). She captures her thoughts and ideas visually in the immediacy of the line, stores these drawings carefully, and only years later translates the ideas into sculptures, or not. As a consequence, many things turn up in the drawings which are never developed further.

In the drawing offered here at auction “Glorieux yeux globuleux” from 1998, Bourgeois unites two essential themes from her work: the human body and the form of the spiral, as symbolic of the life process. Using a red ball point pen, and a spiralling movement, she has two coloured circles grow from the page, which directly assault the viewer’s gaze. Thus, Louise Bourgeois reveals an entirely distinct formal and material language, dealing with the existential theme of being human and, at the same time, the entirely personal experiences, which she tirelessly dares to confront: fear, dependence, memory, sexuality, love and death.

Alongside installation-based units and her sculpture, drawing is the medium in which Louise Bourgeois best conveys her direct and emotionally charged message. In this lies the charm of Louise Bourgeois’ art. She creates universally comprehensible pictures for individual experiences.

Sold for CHF 22 100 (including buyer’s premium)
All information is subject to change.