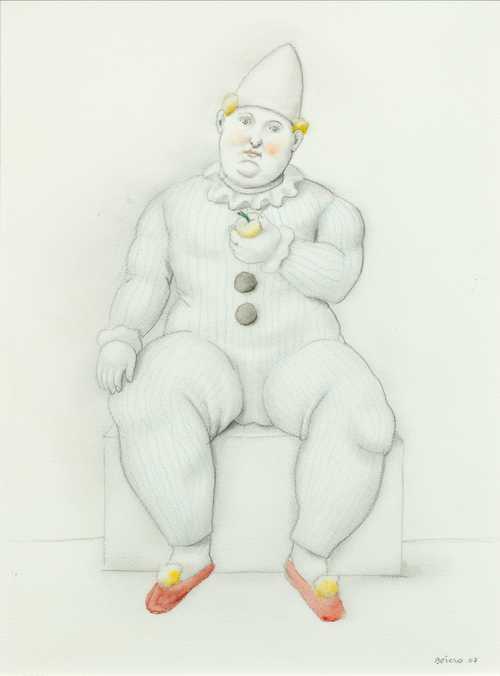 (Medellin/Columbia 1932 - lives and works in Monaco)
Pierrot. 2007.
Watercolour, coloured pencil and pencil on paper.
Signed and dated lower right: Botero 07.
41 x 31 cm.
Provenance:
- Galerie Gmurzynska, Zurich (verso with the label).
- Purchased from the above by the present owner in 2008, since then privately owned Switzerland.

In the course of his career, the Columbian artist Fernando Botero has consistently produced series on specific themes, such as his “Bullfighting pictures” in the 1980s, or the 48-part series “Abu-Ghraib”, from 2004. In 2007, he began a new series, “Circus”; “I was in Mexico, in the small town of Ziuatanejo on the Pacific and saw a parade on the main street announcing the arrival of the circus. Not the kind of circus you can see in Europe or New York, but a modest one, of the type that used to come to my home town of Medellín when I was a child. (...) I was fascinated by the colour, the hungry animals, the poetry of the environment.” (quote from: Fernando Botero in: Fernando Botero. The Circus. Galerie Gmurzynska, Zurich 2008, p. 16.). In this series, with his over-abundant figures, the artist celebrates the colourful and theatrical atmosphere of the typical circus scenes. The circus series comprises 134 paintings and 57 drawings, which were produced in 2007/08.

Notwithstanding the excessively voluminous characters, Botero sets the luxuriant splendour of the human body in the foreground. The viewer’s gaze is steered towards the aesthetic features. As in the present drawing, the artist presents his figures through the medium of the classic portrait: seated on a stool, before a white background, or standing before a stage curtain, the clear lines dominant, as they depict the athletes immersed in their ease and dignity. Botero studied painting in the 1950s at the Academia San Fernando, the Prado museum in Madrid and in Florence. The masterpieces which he saw in Europe, can be clearly recognised in his work from the 1960s. He himself describes his style as “figurative Post-Abstraction”, because, as with the abstract artist, he creates his forms freely, but reproduces them on the picture support with classic plasticity.

The Pierrot is a male figure of the theatre, with his origins in the Italian Commedia of the 16th century, and was later taken up in entertainments in France. His character is consciously somewhat dreamy, naive, melancholic and poetic. He wears white flowing garments with large buttons, thin colourful shoes, a collar and felt hat, these last two adorn a face painted white with flour. Botero’s drawing of “Pierrot” is true to the historical costume. The delicate pine stripes accentuate the curves, which generously fill the wide costume. We have a sense of sitter waiting, thinking of something other than his pose, but wishes respectfully to stay in character. The viewer is lost in memories of a timeless world, where a real presence from an unreal world sits opposite him with a gaze which is almost intimate.