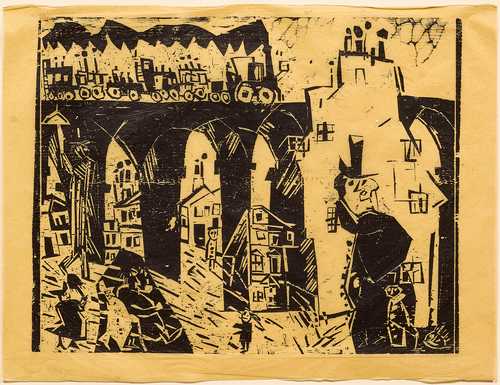 
“...When does the lithography class start? ...You are going, aren’t you? You’ll quickly get to learn some really useful things - to do with techniques and resources - and then you can tell me all about it, can’t you? I am really interested in lithography. I am also learning engraving... I would especially like to do old towns... a whole series of sheets with motifs like that, and then a cycle on locomotives..”. (zit. Prasse, S. 34, Extract from a letter dated 1.11.1905 from Lyonel Feininger to his future wife Julia Berg)

Lyonel Feininger was born in 1871 in New York: his father was a German violinist and his mother a German singer. When he was 16 the family moved to Europe, where the young Feininger attended the School of Applied Arts in Hamburg, and the Berlin Academy until 1892, and subsequently the Aadémie Colarossi in Paris. Feininger was without doubt one of the most gifted draughtsmen, printers and painters of his time. From 1889, he began his career as an artist doing caricatures, with commissions for various Berlin satirical newspapers, and from 1894 for the American publishers Harpers Brothers. Until 1898 he was a permanent employee of the “Berliner Tageblatt”. His drawings appeared in Germany and the US.
The railway motif in Feininger’s art had its origins in his childhood in New York, with the intoxicating experience of the opening of Grand Central Station (1871) and the construction of Brooklyn Bridge (1883). People’s mobility increased rapidly within short and regulated periods, according to exact schedules. People began to hurry and were able to move through landscapes by direct and regular routes, thanks to shortcuts such as tunnels and bridges. This new mobility, as well as the often-monumental constructions of train stations or bridges and the resulting altered landscapes were recorded by numerous impressionist and expressionist artists.
In the years from 1906 to 1908 Feininger lived in Paris, where he visited the neighbourhoods of Arcueil and Meudon to the south of the city. He made the acquaintance of Robert Delaunay, whose art would influence him. Alongside the numerous etchings (a total of 65 plates) and lithographs (20 plates) which he had been working on since 1905, there were Feininger’s drawings and sketches, with the railway motif produced mostly in the period 1908 to 1911. These included the drawing “Viadukt von Arcueil” in 1911, where the pictorial composition presumably served as model for the woodcut from 1941, which is offered here at auction. The bulk of his printed works were the 320 woodcuts, started only in 1918 after the First World War, since metal plates and colours had become increasingly scarce in Germany at that time. Thanks to his spontaneity in capturing the motifs and his superior technical skill, already within three years he had created an extraordinary group of 237 blocks.

The present sheet was made by Feininger only after his return to the US - to New York, where he was to live until his death in 1956. The foundational element of the viaduct, and the abstract yet even dome of this massive and richly contrasting wall, appear to offer something of stability and calm in the lively and active everyday life of the small town in the picture.

Sold for CHF 30 500 (including buyer’s premium)
All information is subject to change.