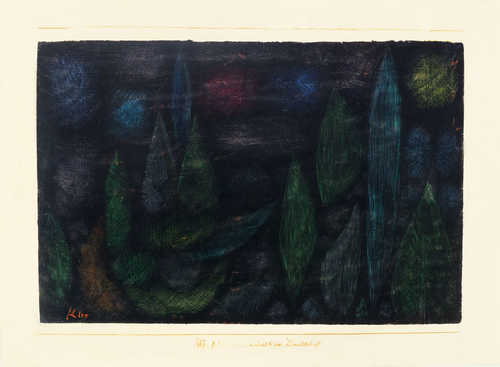 After a house search of Paul Klee's Dessau apartment by the National Socialists in March of 1933 and his termination without notice as the director of the Düsseldorf Academy, he emigrated to Bern at the end of 1933. The recognised and celebrated 55-year-old artist, who had been at home in the European art metropolises of the 1910s and 1920s, felt isolated and alienated in Bern. In 1936 he suffered from severe progressive scleroderma, which led to his death four years later. Despite his international recognition with exhibitions in London and New York, he found it difficult to rediscover and solidify his artistic language. Nevertheless, he accomplished precisely this around the year 1937 and created an extensive, self-contained body of late work which provided an inexhaustible repertoire of inspiration for the subsequent generation of abstract artists.

“But Klee’s final introversion, too, would be turned outward. As his identity folded into that of his art, it also folded into the ongoing history of the avant-garde. For these late works provided a legacy with which that avant-garde was to renew itself after Klee was gone, in an abstract language that merged symbol and self.” (Exh.cat.: Paul Klee, His Life and Work, Museum of Modern Art, New York 1987, p.79).

The present work, Nächtliche Landschaft, comes from this late phase in Paul Klee's oeuvre, and yet it is almost unique in the context of the time. Graphic symbols and ciphers play no role, nor does his increasing experimentation with unusual techniques and materials or the use of colour. If viewed from a distance, our work appears as a black surface. Only upon approaching the work, one detects the floral forms, which are reminiscent of diverse types of plants and trees. Klee masterfully breathes depth and vitality into the pitch-black sheet : depth is created through the different sizes and shapes of the trees and plants, but also through the round, partly open forms in the upper area of the picture that suggest the night sky. He hatches the forms, partly horizontally, partly vertically, partly combined, so that the image gains momentum. The black of the sheet continuously shines through, and so the trees seem to sink into the nocturnal blackness, yet effectively stand out through their subtle colours at the same time. Klee does not set the shapes and colours against each other in this wonderful work, but skilfully lets them overlap and merge into a conditional unity.

Sold for CHF 138 500 (including buyer’s premium)
All information is subject to change.