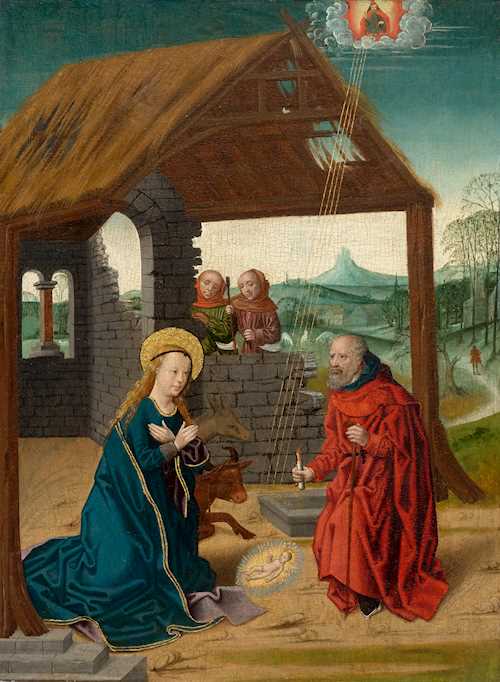 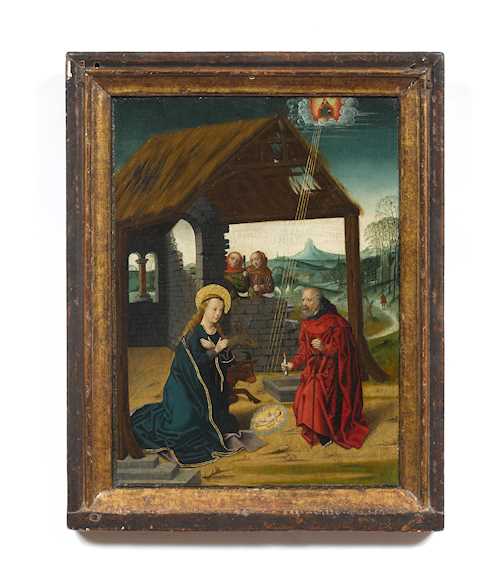 
This beautifully preserved panel, which Dr Michaela Schedl dates to circa 1480-90, may have been a single panel or the central panel of a small triptych which served as a private devotional image.

It depicts a group of five people in a triangular composition in front of the ruins of a brick building with a thatched roof: in the foreground, Mary and Joseph kneel before the naked Christ Child. Over the wall of the building behind them two shepherds with their hoods pushed back look into the stable. Depicted on a smaller scale, the ox and donkey lie/stand behind the Blessed Mother. The ox has a tuft of hay in its mouth, which it has taken from the stone trough in front of it. Its gaze is directed towards the Child lying before him. At the upper edge of the picture, God the Father can be seen giving his blessing in a cloud of glory and surrounded by a yellow-red light. Four golden rays emanate from him and lead to the Son of God. The latter is surrounded by a golden aureole framed by a light blue band.

As Dr Michaela Schedl explains in her detailed certificate, the Nativity scene depicted here combines two iconographic motifs in three sections of the painting, which are taken from different written sources: the Nativity in the foreground is based on a type of picture that was common in North Alpine book and panel painting since around 1400 and is rooted in the "revelationes" of St Bridget of Sweden (1303–1373). The motif of the naked child lying on the ground in the aureole with rays, Mary's golden hair and the depiction of Joseph coming into the stable with a candle originate from these visions. The light-giving God the Father at the top of the picture also appears in the earliest Bridgettine pictures, although this is not part of the vision. In the later period – as here – only tenuous connections to the vision can be seen. The Gospel of St Luke (Lk 2:15-16) contains an account of the two adoring shepherds in the middle ground: "When the angels had left them [i.e. the shepherds] and had returned to heaven, the shepherds said to one another: Come, let us go to Bethlehem to see the event which the Lord has made known to us. So they hurried there and found Mary and Joseph and the Child who was lying in the manger”.

According to Dr Schedl, the various motifs and the design of the landscape indicate a painter who worked in the southern Netherlands. Thus, motivic parallels can be seen between the panel offered here and a Nativity dated around 1434–35 which is attributed to the painter Jacques Daret (1404–1468), who worked in the Southern Netherlands. It is in the Museo Thyssen Bornemisza in Madrid (inv. no. 124/1935.17).

Further connections can be found to a Nativity almost twice as large which was part of a winged altarpiece. It was also created in the southern Netherlands, dated around 1460, and is now in the Metropolitan Museum of Art in New York (inv. no. 32.100.39).