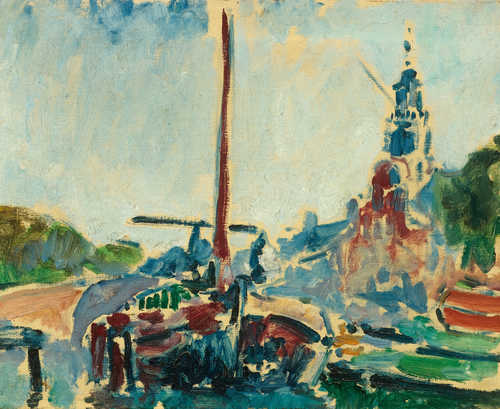 (Rotterdam 1877–1968 Monte Carlo)
Péniche à Delfshaven. 1907.
Oil on canvas.
Signed on the reverse on the canvas: Kees van Dongen.
40 x 48 cm.
The authenticity of the work has been confirmed by the Wildenstein-Plattner Institute, New York, 13 December 2017.

Provenance:
- Galerie Kahnweiler, Paris 1907 (with label on the reverse).
- Dr. Alfred Ganz, St. Niklausen, Luzern.
- Paul Cassirer und Hugo Helbing, Berlin, sale 30 October 1928, no. 21 (as "Landschaft mit Kirchturm").
- Otto and Helene Welter, Waldkirch, bought from the above.
- Private collection, Switzerland, by descent from the above to the present owners.

In the present work, Kees van Dongen shows his birthplace, the port city of Delfshaven, which by that time had already grown together with Rotterdam. The house in which the painter grew up was located between two harbours, thus surrounded by water on two sides. In recalling his childhood, Kees van Dongen said: "It was half village, half town. Behind the house was water, in front of the house was a small footway and then also water. The ships passed before the windows. Everything was full of light, full of colour" (translated from Guth, P., La Revue de Paris 56 1949, vol. 1, p. 132).

In 1907 his financial breakthrough was just beginning in Paris. The previous year he had sold some of the first works to Bernheim-Jeune, who took him firmly under contract from 1908 onwards. In February, he travelled for a short time to his homeland with Guus and Dolly, his wife and daughter.

It is quite possible that he was inspired to return to the subject of harbour scenes by his painter friend Paul Signac. At that time Signac, likewise exhibiting at Bernheim-Jeune, created some sketches and eventually a large-format painting of the Rotterdam harbour (today in the Van Beunings Museum) in his typical pointillist style. He was impressed by the rapidly changing scenery and wrote to a friend: "I fight against the Meuse. It is a never-ending ballet of boats and smoke. And the effects, which change every moment. It is not painting; it is stress" (translated from: F. Cachin, Signac, Catalogue raisonné, Paris 2000, p. 377). It was a major challenge for Signac to depict movement through Pointillism's rather static qualities.

The present work could be understood as Van Dongen’s answer. It shows the impressive certainty with which this Fauvist captures the ships, the water and the buildings in only a few brushstrokes of very different colours. As opposed to scenes of the main harbour, this much quieter scene is imbued with a particularly strong emotional power through the artist's expressionistic execution. Perhaps Van Dongen also wished to share a story through the salient features of the composition, with its towering mast of the ship and distinctive building on the right bank with protruding empty flagpoles. This is possibly the Pelgrimvaderskerk (Pilgrim Fathers’ Church), the name of which was bestowed by its American visitors. In 1608, a group of English religious dissenters fled to the Netherlands after they have left the Anglican Church. After some time, they decided to become Pilgrims and crossed the vast waters to America where they could freely worship God in their own way. The great adventure began at this location on 21st July 1620. There awaited a ship, the Speedwell, to bring them to America. According to chronicles, the Pilgrim Fathers knelt in prayer on the quay near the church.

It is possibly not a coincidence that Kees van Dongen, who left Delfshaven for his art, painted precisely this location. He perhaps saw himself travelling in his own "Speedwell".