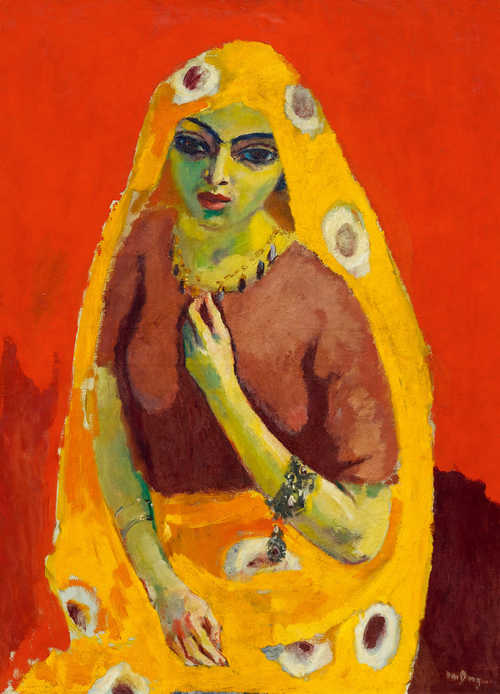 (Delfshaven/Rotterdam 1877 - 1968 Monte Carlo)
Rouge et Jaune (L’Egyptienne). 1910-11.
Oil on canvas.
Signed lower right: van Dongen, as well as titled and signed on the reverse of the canvas.
100 x 73 cm.
The authenticity of the work has been confirmed by the Wildenstein-Plattner Institute, New York, 30 October 2017.

Provenance:
- Otto and Helene Welter, Waldkirch, presumably bought in the 1920s.
- Private collection, Switzerland, by descent from the above to the present owners.

"The women he paints are for the most part [...] inspired with such melancholy beauty that the initiated gaze in rapture for hours at a time" (New York Times, 5th April 1908).

Between 1908 and 1910 Van Dongen exhibited at the galleries of Kahnweiler, Thannhauser and Bernheim-Jeune. The latter even entered into a firm contract with him and bought around forty paintings in one fell swoop. The resulting financial security began a period of travel for Van Dongen.

For the Dutch-native painter, the French scene felt too narrow and he was unable to identify very well with the sometimes rather heavy French orientation of his group of painters. He sought an international art form capable of implementing a culture-independent aesthetic. Thus, he travelled more, and further, than any of his other Fauvist colleagues. Van Dongen’s particularly expressive paintings, arising from the impressions gained during his travels to Spain and Morocco during the winter of 1910-11, extraordinarily impressed the Paris art scene. The most important critics unanimously praised his merits: Warnod, Salmon, Coquiot, Apollinaire, Vauxcelles, Elie Faure, René Jean, and Guillaume Jeanneau reported in magazines, such as "Cornique des Arts" and "Gil Blas", of the stimulus that Van Dongen brought back from the countries he had visited, and which he presented in exhibitions in the summer of 1911. Elie Faure even called it a "sensual poem of the world". Most of these intensely coloured, large-format paintings, to which our "Egyptienne" belongs, can be admired around the world today on the walls of the most important museums.

At that time, as the Fauvists began to depart from their style and embark in new directions, Van Dongen virtually exaggerated these effects and achieved great success through his painterly consistency. He let "colour triumph unswervingly" (Gaston Diehl, Van Dongen, 1967, p. 49).
Particularly striking is the eminent role played by the colour red, which was considered the essence of the style: "Fauvism," once joked Matisse, "is when there is red in it" (quoted in John Klein, "Van Dongen, Postmoderne Fauve", in: Exh. Cat. Van Dongen, 2008-09, p. 221). Especially in portraits, his favourite genre, Van Dongen relished in the application of red, as can be seen in a large-format portrait of his wife Guus, also from 1911 (cf. Ill. 1), and also in most of the oriental portraits, which are amongst the artist’s most expensive works on the market.

These works embody Van Dongen’s very unique form of "Orientalism". Thematically, these works are subtler than the previously created portraits of brothels and circus scenes, showing the lasciviousness of Montmartre that Van Dongen experienced after his move to Paris. The artist’s concern was not only the fascination of the exotic oriental cultures, but above all he sought to make a tangible, dazzling tension of distance and proximity. Although important elements in our "Egyptienne" create a discreet distance, such as the prominent yellow veil enveloping the woman, the sitter still corresponds to the archetype of Van Dongen: a sensual woman with red lips and graceful pose, looking out towards the viewer with intense eyes. The strong contrast of the painting’s eponymous colours, red and yellow, produces a large spatial depth, likewise generating a formal contrast between distance and proximity within the work itself.

Sold for CHF 1 745 500 (including buyer’s premium)
All information is subject to change.