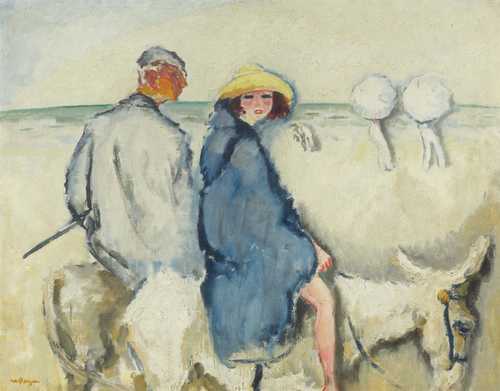 Provenance:
- Galerie Bernheim-Jeune, Paris.
- Collection R. Staechelin, Basel, no. 78.
- Galerie Beyeler, Basel, no. 1471 (with label on the reverse).
- Private collection, Switzerland, bought at the above gallery, by descent to the present owners.

Kees van Dongen regularly visited his birthplace of Delfshaven throughout his life. Thus in 1912, he and his family, his wife Guus and his seven-year-old daughter Dolly, took their holidays in the homeland. The small town of Scheveningen lies just 30 minutes away from Delfshaven. It offers the perfect day trip, with its beautiful situation directly by the sea, surrounded by dunes, sand and the salty sea air. The present painting shows two figures riding on donkeys. At that time, donkey riding on the beach was considered an interesting activity for children. It can therefore be assumed that the depicted female figure is Van Dongen's daughter Dolly, whom the artist often portrayed. Dolly frequently wore shoes, jewellery, hats and sometimes even her mother’s dresses in her portraits, which is one reason she always appears slightly older in her father's paintings. The face of the sitter is very similar to other portraits of Dolly. The identity of the second person is unclear; perhaps it is the donkey guide and owner who accompanied the children.
While the restrained grey and white background anticipates Van Dongen's later work of the 1920s, the artist employs his Fauvist palette of red, yellow, and blue in the faces and colouration of the figures. The female head gazes directly at the viewer from amidst the scenery. Van Dongen, the master of the female portrait, accomplishes once again to exemplify the unmistakable Van Dongen face with almond-shaped eyes, big hat and red lips.