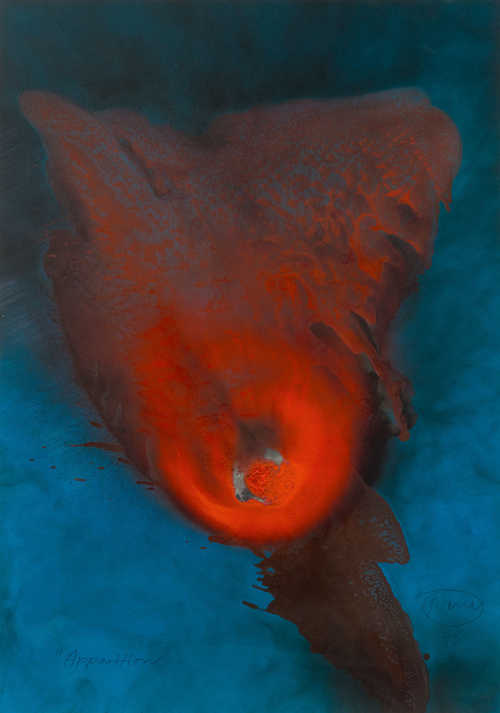 (Laasphe 1928 - 2014 Berlin)
Apparition. 1976.
Mixed media (pigments, gouache and traces of fire) on cardboard.
Signed and dated lower right: Piene 76, as well as titled lower left: "Apparition".
68 x 48 cm.
Provenance:
- Galerie Ehrensperger, Zurich.
- Purchased from the above by the present owner in 1977, since then private collection Switzerland.

„The artist is not a refugee from the „modern world“, no, he uses new technical means as well as the forces of nature“. (cit. Otto Piene: Die Entstehung der Gruppe „Zero“ in: ZERO, Cologne 2015, p. 244)

Instead of with colour and paint brush, Otto Piene, one of the most important protagonists of the international ZERO movement, experiments with alternative artistic means and makes use of natural elements such as light, movement, wind, fire, air and energy since the 60’s. In this way Otto Piene interprets art, through incorporating natural scientific findings and an intensive connection of art, technology and nature, as an energetic phenomenon. For him it is about “re-harmonising the relationship between man and nature”.

In light of this ideal, Piene brings to perfection his famous fire technique, in which the work presented here was created in 1966. With an aesthetically refined mania, the Fire Flower blooms from a powerful red ball in the lower half of the picture, to a wide-branching dynamic flaming filigree flower. Piene reaches this creative process with help of fire, whereby the colours gel in the space of its short burning cycle. After the fire has expired the autonomously created sculpture is fixated, thus the organic becoming of nature is confronted with the artistic intervention of various techniques and leads to a synthesis. The destructive traces of the fire form residues in numerous shades of colour and modifications, as in our work, over which the artist has only a limited degree of influence. The significance of chance is always an important part of the picture for Piene: “I must admit, that I am always happiest with my work, when it has taken a surprising turn” (Otto Piene).

The gouache offered here captivates through its extraordinary composition and harmony of colours. The Red Fire Flower enters into an impressive connection with the blue background. While the bright red ball in the lower half of the picture creates a dramatic contrast, the colours of the Fire Flower and the background melt increasingly into one another as the flower grows upwards and branches out.
Hardly an artist of the 20th century has given himself over to experimentation, the transboundary trials to turn elements of nature into art, and created such an outstanding oeuvre.

Sold for CHF 25 700 (including buyer’s premium)
All information is subject to change.