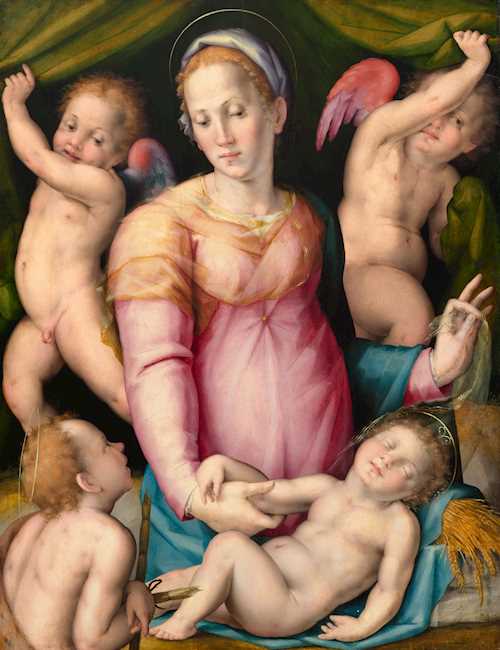 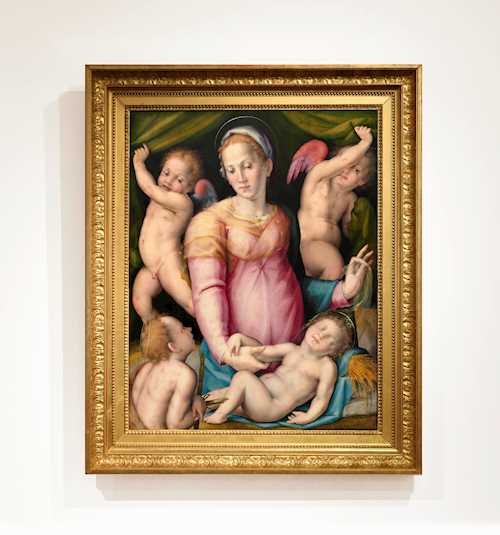 Exhibited:
On loan to the Detroit Institute of Arts, 1982–1994 (loan from the British Railway Pension Fund).

The museum-quality painting offered here is one of Pier Francesco di Jacopo Foschi's major works. Foschi, who was largely unknown amongst researchers until he was rediscovered by the art historian Roberto Longhi in 1953, is today considered one of the leading Florentine painters of the 16th century. The son of Jacopo Foschi (1463–1530, who was a pupil of Botticelli (1445–1510), he studied in the workshop of Andrea del Sarto (1486–1530) until 1530.
Created probably between 1530 and 1540, this high quality and very well-preserved work can be dated to the period when the artist was working with and under Jacopo da Pontormo (1494–1557) in particular.
While in his early works Foschi’s artistic style was largely influenced by the paintings of his teacher Andrea del Sarto, during this time he abandoned the descriptive-narrative elements in favour of an emphasis on the mystical-religious and made his compositions increasingly schematic, as witnessed also in the painting here:

The figure of the Madonna, depicted in three-quarter profile, is in the centre of the composition. Wrapped in a pale red robe, with a yellow veil draped around her shoulders, her lowered gaze and her body arranged in a slightly s-shaped curve, draw our attention down towards the Infant Jesus. As he rests on her blue cloak, she tenderly holds his arm. The feet of the Infant Jesus then lead the eye to the lower left corner of the picture, and thus to the Infant John, who raises his head towards the Madonna pointing the way back towards the upper half of the picture. There, two angels, flanking Mary closely on the right and left, open the green curtain and present the intimate scene to our gaze.

Stylistically committed to Mannerism, with the interlocking arrangement of the figures the pictorial space appears tightly compressed; at the same time the rhythmic composition of gaze, hands and curved bodies creates a lively dynamic. The precise use of colours and the delicate skin tones of the figures complete this masterly depiction.

While the elongated figures are redolent of Michelangelo, in this period Foschi’s compositions appear altogether more rigorous and structured than before. They are also reminiscent of the painting of Fra’Bartolomeo (1472–1517) and anticipate pictorial concepts of the Counter-Reformation.

Pier Francesco di Foschi painted numerous altarpieces and frescoes for influential sponsors in Florence, which was flourishing both economically and artistically. These included The Resurrection (1537), The Transfiguration of Christ (circa 1545) and The Immaculate Conception (circa 1545) for the Church of S. Spirito. The frescoes of the oratory of Villa Rosselli del Turco were produced around the same time.
Foschi was also involved in collective commissions for the Medici, such as the painting of Villa Careggi under Jacopo Pontormo, and the festive decorations for the marriage of Cosimo I to Eleonora of Toledo (1539) and Francesco de'Medici to Joanna of Austria (1565).
In 1564, together with artists including Agnolo Bronzino (1503–1572) and Giorgio Vasari (1511–1574, Foschi was one of the founding members of the commission for the Accademia delle Arti del Disegno, where he held positions of great responsibility until his death.
In 1565 Vincenzo Borghini, the court writer for the Medici, named him as one of the most important Florentine artists alongside Bronzino, Vasari and Michele Torsini (1503–1577).

The painting is listed in the archive of the photographic collection of the Fondazione Zeri under number 34276.