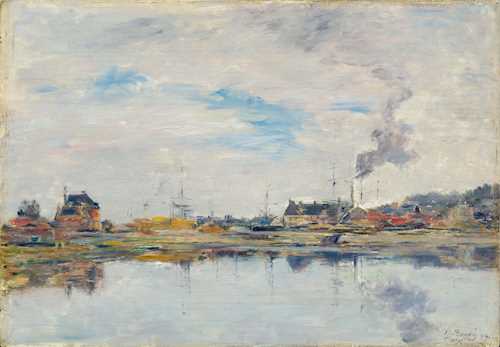 Born the son of a sailor in Honfleur in northern France, Eugène Boudin felt drawn to the ports and coasts of the region. He was one of the first to paint outdoors, “en plein air”, before the motif. This practice allowed him to impart his works with an energetic immediacy and freshness. Boudin dealt intensively with the rendering of the effects of light and atmosphere. He had a profound impact on the Impressionists, and particularly on Claude Monet, whom he encouraged to paint outdoors. In later years, Monet was quoted as stating, "if I became a painter, I owe it to Boudin." Although he was already an established painter and older than the other Impressionists, Boudin exhibited with them in the first group exhibition of 1874.

Eugène Boudin is primarily associated with his love of depicting the seascapes of Trouville, as well as the busy harbours and ships that navigate the waters of remote ports of call. Beginning in 1863, Boudin travelled to Trouville every summer, finding inspiration to paint endless variations of his favourite subjects, including beach scenes and harbour views. In the second half of the 19th century, after Trouville had been connected to the train network, the town became a fashionable summer resort for French nobility.