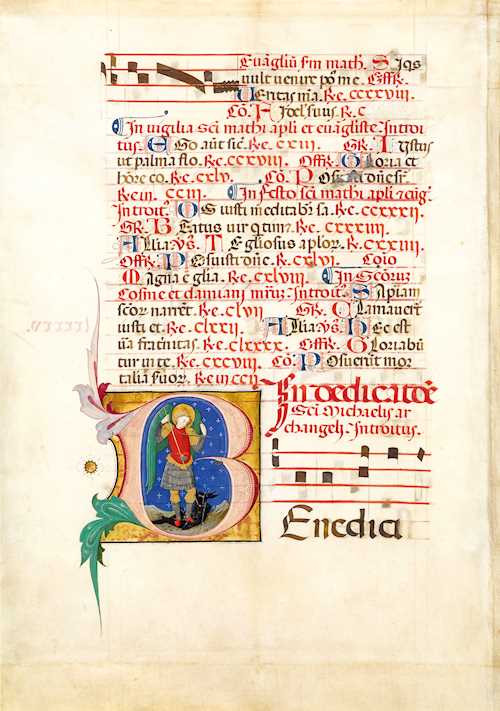 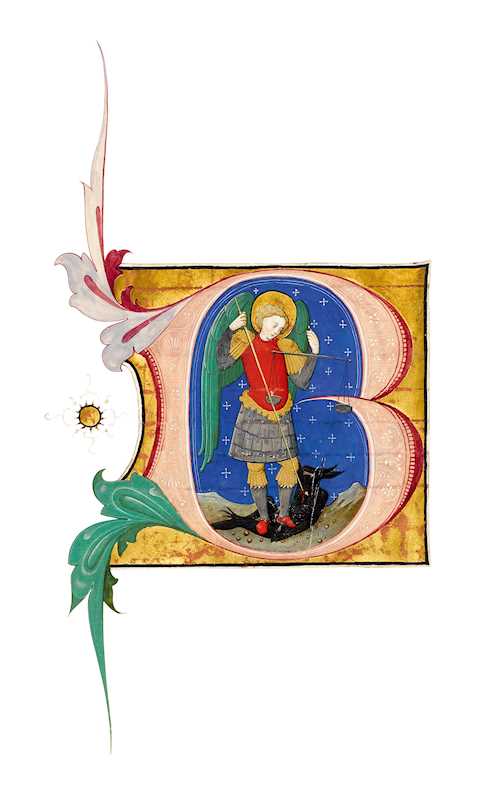 Third Bessarion Master (active in Lombard in the third quarter of the 15th century).

The present gradual leaf with the introit for the Feast of Saint Michael (29th September) comes from an important dismembered gradual, which originated from a donation from the Greek Cardinal Bessarion (c. 1399/1408-1472), one of the most important churchmen of the 15th century and papal legate in Bologna (1450-55). It is part of a large gift from the cardinal, who commissioned a 14-volume series of choir books for the Franciscan convent of Saint Anthony of Padua in Constantinople. The series comprised four gradual volumes, nine antiphonal volumes and a hymnal. While three of the gradual volumes, namely those of the Proprium Tempore, have been preserved and are in the Biblioteca Malatestiana in Cesena (MS Bess, 2,5,1) (Bessarion 5 is dated 1452), we are interested in the fourth gradual volume with the Proprium Sanctorum, which was dismembered during Napoleonic times and the individual pages sold. Ten of them have survived, according to the current state of research, including the leaf offered here (Palladino 2003).The antiphonal series also suffered the same fate and half of the volumes have only survived in individual fragments.

The work for the illumination of this choir book series probably began around 1452 or shortly before. Two volumes (MS. Bess. 5 (1452) and MS. Bess 6 (1455)) are dated, but the illumination of the choir books must have extended over a longer period of time. The entire project was entrusted to a team of book illuminators made up of several Lombard and Emilian artists, including the Second Master of Antifonario M from the San Giorgio Maggiore in Venice, the Lombard of interest to us, "Terzo Maestro del Bessarione", the Master of the Breviario Francescano also from Milan, and Francesco de Russi, a well-known miniaturist of the humanist Renaissance who also contributed to the famous Borso Bible in 1455-1460. As Borso d'Este's coat of arms, just as that of Bessarion, is depicted on the frontispiece of various Bessarion volumes (Venice, Fondazione Giorgio Cini, 22124; Milan, private collection 72), it can be assumed that Borso d'Este supported the Greek cardinal at some point in his project, possibly when Bessarion left Bologna after 1455 and turned to various political missions.

Due to the Turkish wars and the fall of Constantinople (1453) the volumes never reached the Franciscan convent there and were therefore given as an alternative to the Franciscan Observants at Santa Maria Annunziata dell ’Osservanza in Cesena. Bessarion, who was in Vienna on a political mission in 1460—and still hoped to win back Constantinople, but returned sobered from this mission and considered the situation with Constantinople hopeless—probably decided shortly after 1460, in view of this political situation, to donate the choir book series to the Observant convent in Cesena, founded by Violante Malatesta.

The Lombard illuminator, named after his collaboration in the Bessarion (Canova, 1977, p. 7-20), Terzo Maestro del Bessarione, was certainly one of the leading forces within this choir book series and can be found in the earliest volumes of the series. He developed his art rapidly during this project. While the style of his figures in his first illuminations in the Bessarion series in collaboration with his Lombard illuminator colleague, Maestro del Breviario Francescano, show him to be a rather unconfident and somewhat indistinctive illuminator, the artist developed under the impression of the more promising, appreciably more refined art of the illumination team around Franco de Russi and created illumination of the greatest sophistication. His extremely finely drawn, somewhat pale faces were then informed by an ethereal internalisation, which applies to the late leaf with Saint Anthony of Padua preaching to the fish (Milan, private collection 72), as well as to the countenance of the Michael discussed here. These miniatures may have been produced after 1455, probably circa 1458-60. The Bessarion choir book series, from which the present leaf originates as fol. 95 of the fourth volume, is one of the most important artefacts of northern Italian book illumination around the middle of the 15th century.
(Prof. emer. Dr. Gaudenz Freuler, Universität Zürich)