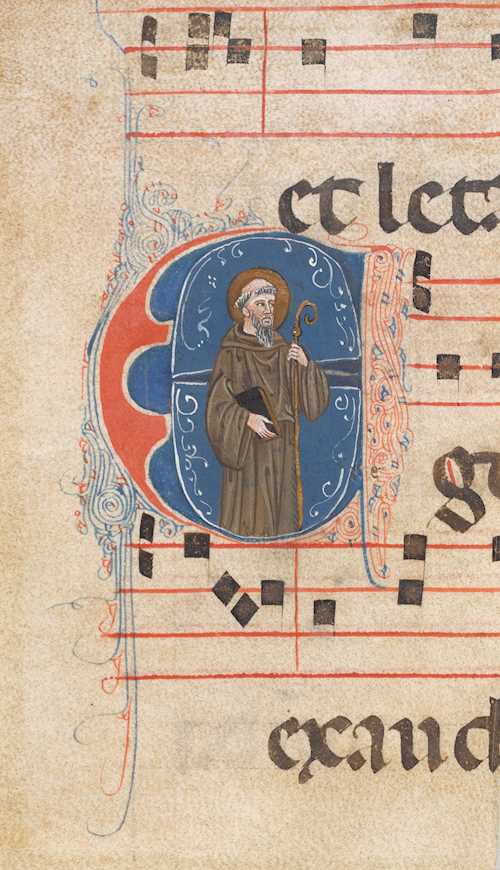 The present leaf fragment with a standing figure of Saint Benedict can probably be assigned to Umbria. The illustrated initial is plainly rendered. The body of the initial is simply executed in red and blue and in this form usually contains only flourished decoration that extends in sweeping lines and tendrils in the same colours, as seen in the present work. Here, however, the initial contains figural decoration in the form of Saint Benedict. This rather rare type of initial design, with a historiated flourished initial, can be found in a similar form in Umbria, where an illuminator presumably from Orvieto illuminated an antiphonal (dismembered) that follows precisely this design principle, as can be seen in the four hitherto known initials (Freuler, 2013, p. 508-513). Another manuscript with a comparable initial design can be found in the Biblioteca Augusta in Perugia (MS. 2800, cf. Subbioni, fig. 350), which suggests that our fragment originated in Umbria. More than contemporaneous production, the comparatives referenced here and Umbrian examples from a few decades later suggest a common tradition. For stylistic reasons, the present leaf should therefore fall in the late decades of the 14th century, whereas later miniatures can be placed in the first quarter of the following century (Freuler, 2013).
(Prof. emer. Dr. Gaudenz Freuler, Universität Zürich)