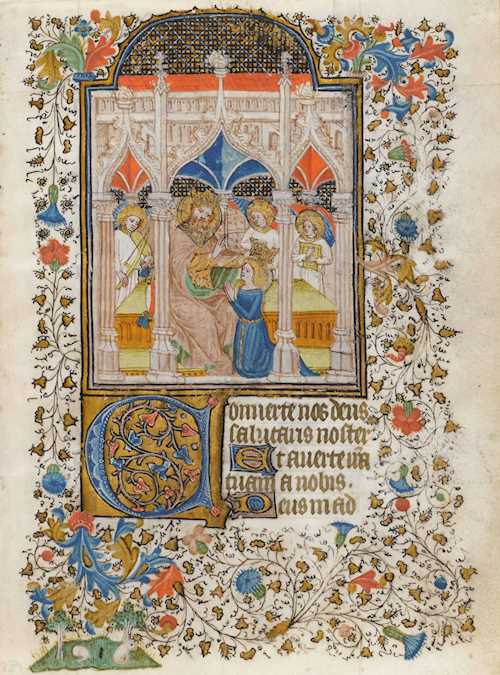 
The present brilliant leaf from a dismembered Book of Hours can doubtlessly be assigned to the workshop of the biographically recorded illuminator Henri d’Orquevaulx, documented in Metz. He signed one of his manuscripts, the richly illustrated manuscript on the decades of Titus Livius (Günther, 2015), dated 1440, and immortalised the writer and himself with a miniature. The significance of this signed manuscript was first recognised in 1888 by Paul Durrieu, who attributed the Book of Hours for Jean de Vy and Perrette Baudoche in the Bibliothèques Médiathèques of Metz (Ms. 1598) unconvincingly to the same hand as the manuscript on the decades of Titus Livius. Indeed the Book of Hours contains miniatures that are definitely stylistically related to the illumination of Henri d'Orquevaulx, but cannot match the quality of the latter. In 1989 François Avril revised this old incorrect attribution of the Heures de Jean Vy to Henri d'Orquevaulx, attributing to him instead three more manuscripts: a fragmented chronicle by Pierre de Herenthal with three miniatures (BNF MS lat. 4931A) and two Books of Hours (Paris BNF MS lat. 10533, and Bibl. de l'Arsenal MS 563). Around 1437 in Metz a "Maistre Henri" was named as an illuminator and painter who was commissioned by Jean de Vy to render murals. It can be assumed that this "Maistre Henri" is the Henri d'Orquevaulx who interests us here. By the middle of the century, he was evidently the central figure in late medieval book illumination in the artistic panorama of Lorraine, especially in Metz.

Other miniatures that have more recently been attributed to Henri d’Orquevaulx are the more than 30 leaves from Guillaume de Deguileville’s Pèlerinage de la vie humaine (Cambridge, Fitzwilliam Museum (MS 1-2003, Ms.11-2005-1-4; MS 2 -2005.1-29; Panayotova, 2005)). In 1999 he and his workshop were attributed with another series of illuminated leaves from a Book of Hours, which were previously still available in a bound form as a complete Book of Hours (Christie’s, New York, 1976, Lot 226). Probably in the years around 1980, this once magnificent book was unfortunately dismembered, whereupon various leaves independently appeared in the American art market (Ferrini 1987).


Due to the presence of various holy bishops of Metz (Clement of Metz and Arnulf) featured in the Book of Hours’ calendar, along with several annotations written in Lorraine dialect (Christie’s, Lot 226), the meanwhile dismembered manuscript, and with it the present leaf, can be assigned to Metz. A large number of the leaves of the aforementioned Book of Hours entered the Jeanne Miles Blackburn Collection via the art dealer Bruce Ferrini, and from there went to the Cleveland Museum of Art in Cleveland, Ohio (Fliegel, 1999, p. 37-42, no. 29-38). The present leaf, one of the most beautiful in this series, also came into a Swiss private collection through Ferrini. It comes from the sequence of the Book of Hours dedicated to the Virgin and concerns the last Marian prayer of the evening. We owe the correct allocation of the leaves of this separated Book of Hours to Stephen N. Fleigel (1999), who assigned the series of the Jeanne Miles Blackburn Collection to the illumination workshop of Henri d’Orquevaulx. This attribution is convincing and can also be verified for the present leaf and one of the related leaves in the Blackburn Collection in the Cleveland Museum of Art (Christ before Pilate). The self-portrait from the decades of Titus Livius (Günther, 2015) that is signed by him can additionally be referenced, where the greatly shortened profile of the self-portrait and the pair of eyes gazing downwards at an angle, as well as the comparatively somewhat stiff drawing appear in complete agreement with the figures of our leaf.

The affiliation of our leaf with the separated Book of Hours from Metz is also revealed through a comparison of the leaf with Christ before Herod from the Blackburn Collection (Fliegel, 1999, Nr. 33), with its border framing the historiated field executed in the same manner with flourished tendrils issuing golden heart and thorn leaves and colourful flowers in red and blue. The composition of both miniatures is likewise executed in a similar manner, namely through the view of the interior of a rose-coloured palace or church architecture, in which the events take place. Compared to the related pieces, our miniature is distinguished by a greater elegance of the figural articulation, which can be seen in the beautiful gothic elegance of the rich and flowing drapery folds of the crowning deity that lend the commanding figure a remarkable three-dimensional effect through their confident execution. Here, as in the comparative leaf, the master himself may have lent a hand, whereas in other leaves the participation of the workshop can also be seen. The Coronation of the Virgin, the heavenly exaltation of the Virgin, would obviously be given a very special position in the manuscript, wherefore this leaf was particularly richly and sumptuously decorated and inserted with a charming scene in the bas-de-page with two rabbits, one of which crawling into a hole in the ground.

The refined narrative style of the miniatures—the Gothic elegance as it was transmitted beyond the Alps through French illumination to Italy with artists such as Gentile da Fabriano at the beginning of the 15th century, reveals a stylistic phase suggesting a period of production circa 1420-30. The present leaf is an important work of courtly French illumination; its high art-historical importance is additionally determined by the fact that it comes from one of the rarely biographically recorded artists of this period. For the related leaves—a large number of these are located today in the Cleveland Museum of Art in Cleveland, Ohio—refer to the auction catalogue of Christie’s, New York, 1976, where the Book of Hours (Lot 226) was still bound and sold intact.
(Prof. emer. Dr. Gaudenz Freuler, Universität Zürich)

Mounted on cardboard. The miniature slightly rubbed in places (particularly in the middle of the left arm of God the Father and around his beard), slightly wavy in the margins (outside of the image), slight browning. Overall in very fresh condition.