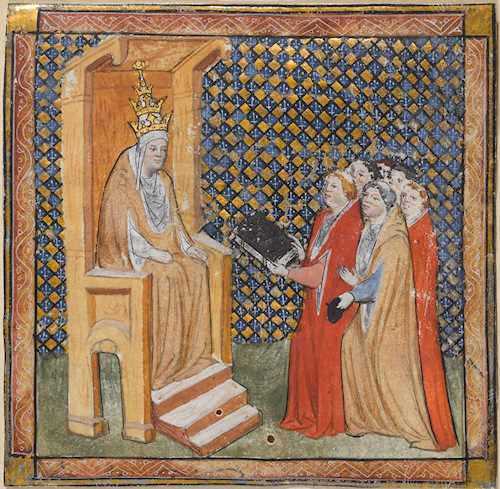 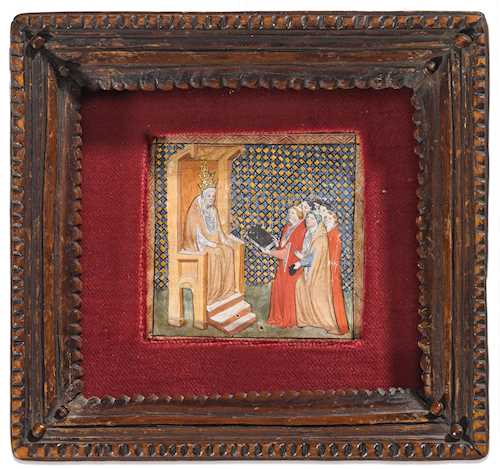 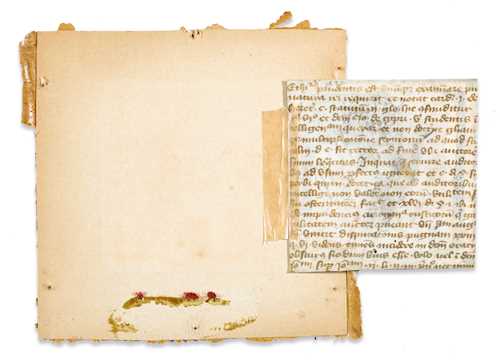 This hitherto unpublicised fragment of a legal manuscript shows a pope sitting on a spatially well-constructed throne receiving a massive manuscript from a group of legal scholars and canons before a diaper-pattern ground composed of diamond latticework in gold and blue. The association with a dismembered legal codex results from the iconography of the miniature and the text on the reverse. As the presenters of the book are scholars and canons, it can be assumed that a manuscript with decrees of canonical law is presented here. The person on the throne could be Pope Gregory IX receiving the Decretals from Raymond of Pennafort, which he had compiled for the pope. Raymond studied philosophy in Barcelona and law in Bologna. He then became a professor of canonical law in 1195. Pope Gregory IX (1227–1241) called him to Rome around 1230, where he was tasked with rearranging and codifying the papal decretals that had accumulated over the centuries. If it is the case that the miniature comes from a dismembered manuscript of Raymond of Pennafort’s Decretals of Gregory IX, the miniature would probably have been decorated with the prooemium "In nomine domini nostri Gregorius episcopum servus servorum dei ...".


The style of this French miniature, in particular the well-composed spatial articulation of the papal throne and the three-dimensional modelling of the figures as well as their fleshy faces, which reveal a materiality based on Italy's artistic drive towards naturalistic dimensional rendering, appear to indicate that the unknown illuminator in question is an artist from southern France, probably working in Avignon. There, Italian artists met with French and Catalan painters, as the papal court library had Italian codices, especially Bolognese and Neapolitan, in addition to those in French, thus providing local illustrators with visual lessons on the new art developed in Italy. Large numbers of decretals were copied and illuminated in Avignon during the period of the papal court there (Bilotta, 2018).

The present illuminator in question, reviving French components through an Italian figural interpretation, could be on a similar and somewhat later stylistic level as the Avignonese illustrator of Ms lat 5221, or the more sophisticated Valencia Archivio della Catedral MS 119 (Manzari, 2006, p. 162-167), which suggests a date circa 1370-80. The present splendid small miniature evidences the cosmopolitan artistic climate at the papal court in Avignon, which had produced a hybrid vocabulary of forms in southern France that combined Italian influences with the French Gothic graphic tradition. A comparison of our miniature with Raphael's famous, large-scale mural on the south wall of the Stanze della Segnatura in the Vatican may reveal how far back and where the Renaissance artist found his ultimate image sources.
(Prof. emer. Dr. Gaudenz Freuler, University of Zurich)