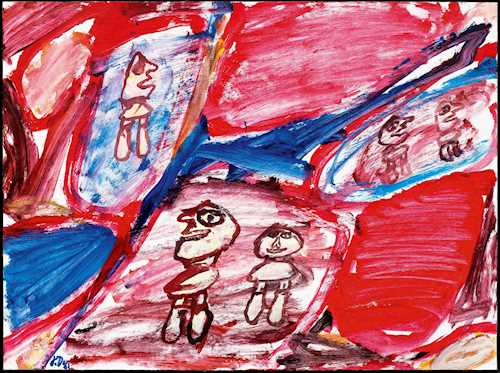 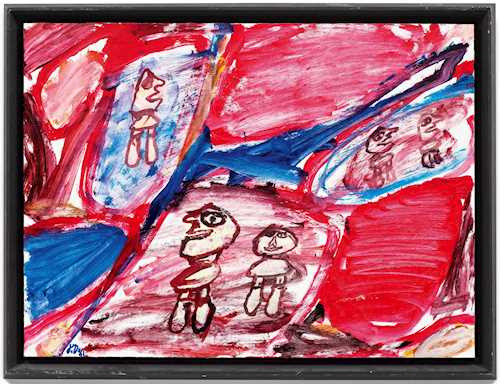 
The French painter, sculptor and art theorist Jean Dubuffet was one of the most important catalysts within the art of the 20th century. As the main exponent of Art Brut, he was one of the most influential artists of the Post War period in Europe. Like an intermediary, he stands between the poetry of Paul Klee and Max Ernst and the delicate surfaces of Art Informel of the 1950s. To a quite extraordinary extent, he opened up new ways for the art of the modern period. As if the utopias of the avant-garde had played out in Jean Dubuffet’s works and become reality.

Jean Dubuffet was born in 1901 in Le Havre, the son of a prosperous and respected wine merchant. After graduating from secondary school, the young Dubuffet moved to Paris in order to study painting at the famous Académie Julian. Sceptical about academic attitudes of the time and the art world, he abandoned his studies after just six months, in order to engage with the most diverse scholarly subjects and to do some travelling, and then returned to the wine trade. Well established in his middle-class life with wife and child, after the death of his father Dubuffet opened his own successful wine business. The urge to make art never left him. Then in 1942, financially solid, he sold his business and finally turned to art. During this time, he made the acquaintance of Le Corbusier, with whom he later undertook a journey around Switzerland. Dubuffet had had enough of established art. He followed the Surrealist concept of art, by freeing his art from Western notions of aesthetics and morality, yet he sought to go deeper. He wanted to create a raw ‘brut’ art, free, uninfluenced, naïf, far from academic educational and aesthetic standards. His interest in what was untypical, such as the art of outsiders, the self-taught art of ordinary people, of children, people with learning disabilities or his recognition of the creative potential of street art, has changed general perceptions to this day. This art was to become the basis of the concept of Art Brut, which was developed by Dubuffet and introduced by him from 1945. He amassed an extensive collection which today can be visited at the “Musée d’Art Brut” in Lausanne.

Influenced by the paintings of Jean Fautrier, he took a similar approach to the texture of his paints. He employed mixed media of gravel, sand, tar and oil in order to obtain a thick colour substance. Initially with his figurative work, his subjects were the surrounding village landscapes, including child-like depictions of cows and peasant figures. He then painted towns and their inhabitants, who slowly took on grotesque caricatured features as he exaggerated the proportions. After a journey through the Sahara, he painted people from the desert, and painted the enormously inflated body shapes with a delicate surface structure, which mark a transition to his fully non-representational series “Texturologies” and “Matériologies” (see Lot 3801 of the auction on 5 December).

From 1962 Jean Dubuffet extended his cosmos. The step away from the saturated and earthy natural colours of the 1950s to the loud, colourful, red, blue and white “Hourloupe” pictures appears at first glance as an abrupt shift. The structures are much smaller and more contained. Jean Dubuffet remains true to himself, however, with the cell-like grids, broad, mostly black outlines, mimicking organic structures. The result is a large number of individual abstract forms, with some figurative elements. The simple scribbles on paper mark the end of the images and the inner forms are filled with blue and red patterns and hatching.

The felt tip works on paper “Personnage” (Lot 3442) from 1965 and “L’Aguicheuse” (Lot 3443) from 1966 are exemplary pieces from this period. Dubuffet’s pictorial language approaches that of a puzzle and becomes ornamental. This virtual world of Hourloupe was transferred to three dimensional sculptural and architectural projects towards the end of the 1960s. His blue, red and white polystyrene sculptures became his trademark. The partly hand-painted multiple offered here at auction “Le Tétrascopique” (Lot 3445) from 1970 is a good example.

In the work offered here at auction from his late period, he used the tools of the “ordinary man”, such as the ball point pen, acrylic on paper and felt tip. The painting from 1981 “Site avec 5 personnages” comes from the period in which Dubuffet reintegrated his early work into his late work: using the colourful palette of the 1960s he painted with an expressive brush stroke, and created cell-like landscapes with figures in a child-like style. This painting alludes to his artistic development and contains within it both Art Brut from his early period and the features of his late work.

Jean Dubuffet, painter of the poetry of the ordinary, died in 1985 in Paris, one of the most important artists of the 20th century.