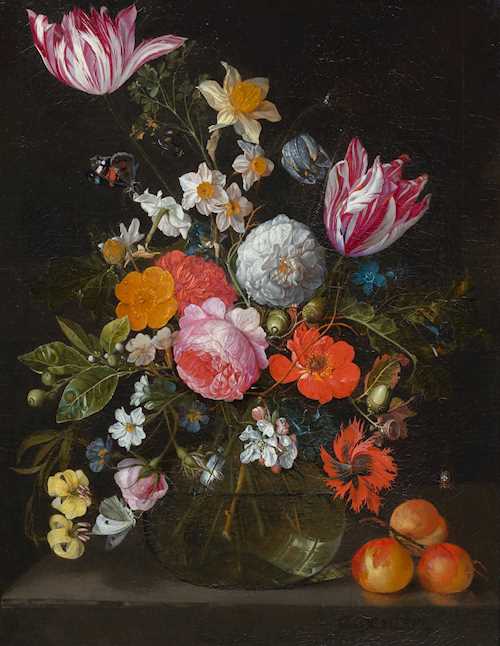 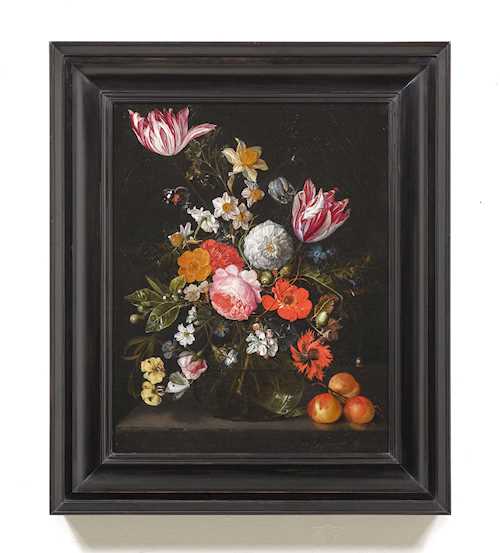 After examining the original, Dr Fred G. Meijer identifies this colourful and detailed bouquet of flowers in a glass vase on a stone slab as a collaboration between Cornelis Jansz. de Heem and David Cornelisz. de Heem. It was painted in The Hague between ca. 1680 and ca. 1687, the year Cornelis moved to Antwerp. Cornelis Jansz. de Heem was a pupil of his father, the highly praised still life painter Jan Davidsz. de Heem (Utrecht 1606–1684 Antwerp). Like his father, he passed on his artistic knowledge to his son, David Cornelisz. de Heem.

The collaboration of father and son, Cornelis and David, is documented in several still lifes, for example in the bouquet of flowers in a glass vase (oil on canvas, ca. 66 x 46 cm) in the Mosigkau Castle in Dessau. This work shows some flowers that are also featured in our version, such as the pink and white rose in the centre, the two narcissi, the two yellow lilies in the lower left and the poppy anemones.

Cornelis Jansz. De Heem's painting style is characterised by a richness of detail and a multi-layered glaze technique, which renders subjects like flowers and insects softer and more transparent. In our painting, this can be seen above all in the tulips and orange leaves.

Another collaboration between Cornelis and David is a garland of fruit and flowers (oil on canvas, 56 x 69 cm) in the collection of the Hofje van Aerden museum in Leerdam, the Netherlands.