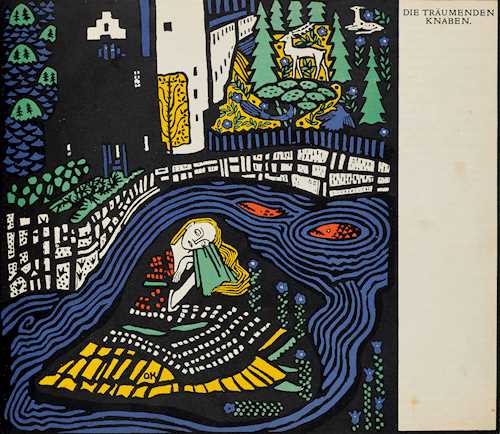 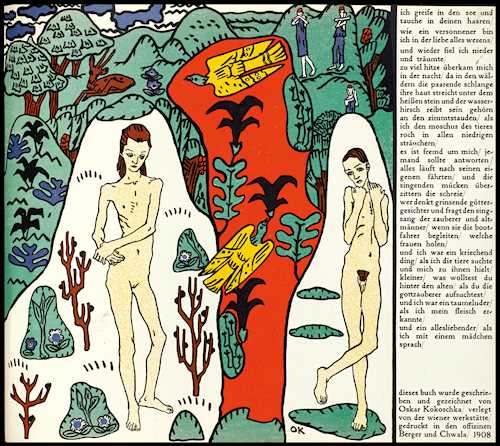 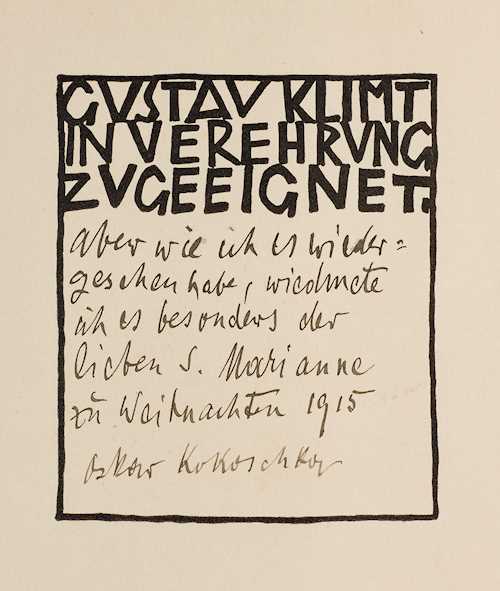 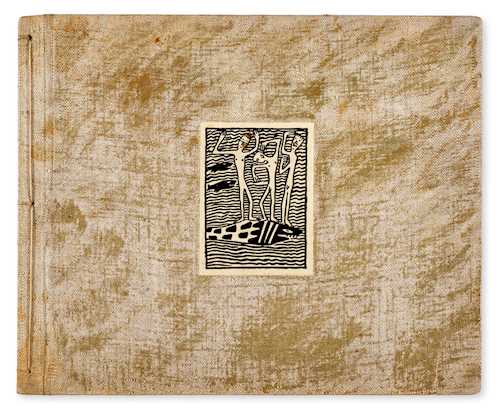 Die Träumenden Knaben (The Dreaming Boys). With 11 (8 coloured; 1 on the front cover of the binding) original lithographs.
Vienna, Wiener Werkstätte, 1908. Oblong 4° (24.5 x 30 cm). 10 leaves. Original cloth binding by the Wiener Werkstätte with gold threads, mounted cover illustration (small stain in the image) and cord binding.
Wingler-Welz 22-29 - Arntz 1-8 - Raabe/H.-B. 1661 - Schauer II, 115 - Jentsch 1 - The Artist and the Book 147: "In this, his [Kokoschka’s] first graphic work, the decorative influence of the Jugendstil and folk art is apparent. The Wiener Werkstätte had commissioned him to write and illustrate a book for children and Die Traeumenden Knaben was shown in the 1908 Kunstschau, where Kokoschka’s work was exhibited for the first time. Only a handful of copies was sold at that time and the book was reissued in 1917 by Kurt Wolff". - First edition. - One of 500 printed copies, only a few of which were distributed in the original version. - 1917 Kurt Wolff acquired the 275 unsold copies and brought them on the market in a modified binding. - With the printed dedication: "Gustav Klimt in Verehrung zu geeignet". Handwritten addition by Kokoschka underneath: "aber wie ich es wiedergesehen habe, widmete ich es besonders der lieben S. Marianne zu Weihnachten 1915 / Oskar Kokoschka” (“but as I saw it again, I dedicated it especially to dear S. Marianne for Christmas 1915 / Oskar Kokoschka”). During this period, Kokoschka was having to recover from a double injury, both emotionally and physically. The emotional wounds were inflicted by Alma Mahler, the physical by a Russian bullet and a bayonet stab. After the war injury, he was first evacuated to Brno and then transferred to Vienna for recovery. At Palffy-Spital, he was cared for by nuns at night and by a number of young women from noble families during the day. The dedication can be assigned to that period and it is quite obvious that the present copy was given to a "S[chwester] Marianne” (S[ister] Marianne) as a token of his gratitude for the care. In the summer of 1915, Alma Mahler married the architect Walter Gropius. - "Commissioned by the Wiener Werkstaette when Kokoschka was only 21 years old, this children’s book was exhibited at the Wiener Kuntschau but very few copies were sold – its failure was no doubt due to the unconventional and disturbing imagery of its art and verse. It is now heralded as one of the landmarks in modern illustrated books, and amongst the earliest ‘livres de peintre’ to originate east of the Rhine. ‘Die Traumenden Knaben’ (the Sleeping Children) [sic] follows the Jugendstil tradition of his teachers Carl Czeschka, Berthold Loeffler, and Gustav Klimt (to whom the work is dedicated). Here one finds a new primitivism where graphic conventions of art nouveau are recast: the deliberate awkwardness of form, angularity of line, and simplicity of gestures gives it a very startling effect for 1908. More than just a children’s book, the artist documents a tormented love affair he was then having with a Swedish girl named Lilith, as this commission turned into a ‘love letter in pictures’, the famous nal image of Adam and Eve being a reference to the girl’s name (Lilith was the name of Adam’s first wife). It is also one of the few books printed for the Wiener Werkstaette, a picture-book whose poetry reflects traditional forms of Germanic folk literature while the vertically conceived space and flat areas of primary colour show the progressive influence of Japanese styles" (cf. Justin G. Schiller, Catalogue 50, Five Centuries of Childhood). - Endpapers and first sheet slightly damp-stained in the lower margin, preliminaries with faint fingermarks, exceptionally beautiful and well-preserved copy with a special reference to the biography of the artist.