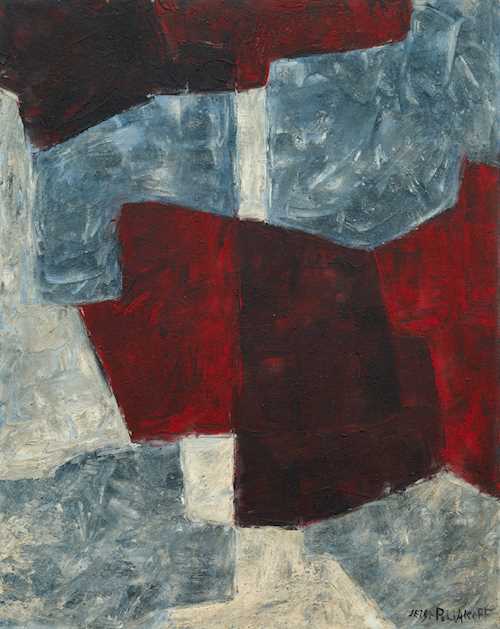 In this auction we are offering two representative works by Serge Poliakoff from the 1950s and 1960s. His early work in the 1940s was characterised more by brown-grey tones. Ten years later, he expanded his colour palette and juxtaposed strong, colourful tones, as in the work on paper here from 1951 (lot 3405). In the 1960s he abandoned his tendency towards rather monochrome colour compositions and again sought a sense of unity in his selection of colours, as in the painting from 1965.

Even though these two works have a very individual nature, composition, and vibrancy, we can see that Poliakoff remains very true to his pictorial language throughout his oeuvre. He follows his clear, recognisable framework of basic lines and axes that structure his paintings, even if they initially appear to have been created without a strict preliminary design. The main axes around which the compositions are built, are always present vertically in the centre, horizontally in the centre, and diagonally. The diagonals never point to the exact corners of the picture support but are always slightly offset.

The sober, graduated tones of the painting, red, burgundy, grey, blue-grey, and white appear as asymmetrical shapes, which gather closely on top of and next to each other and seem to be loosely and randomly, almost organically attracted to each other. Like an enlarged cell structure that we examine under the microscope, the building blocks interlock. The light shapes, in harmony with the dark ones, balance each other out on the canvas.