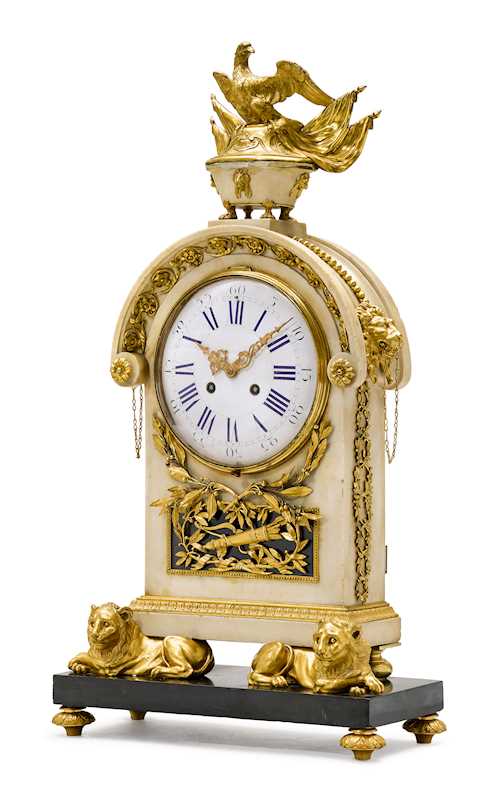 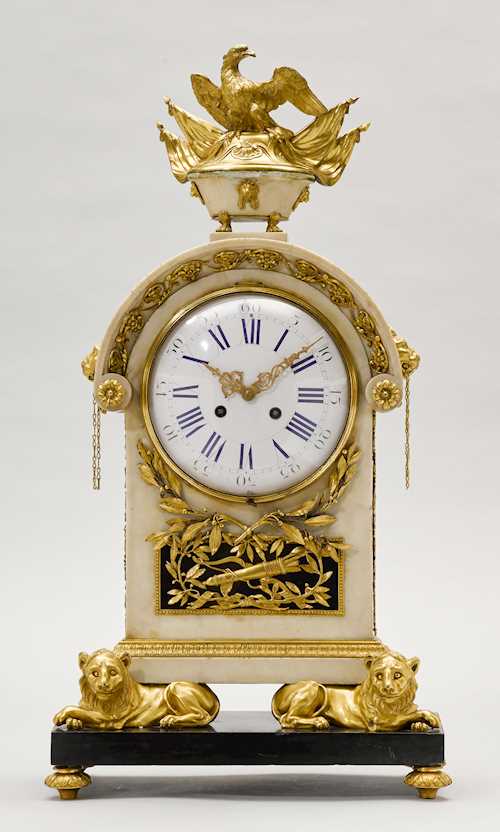 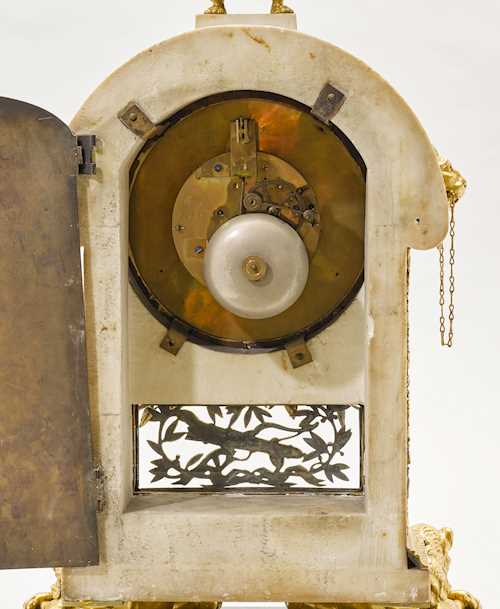 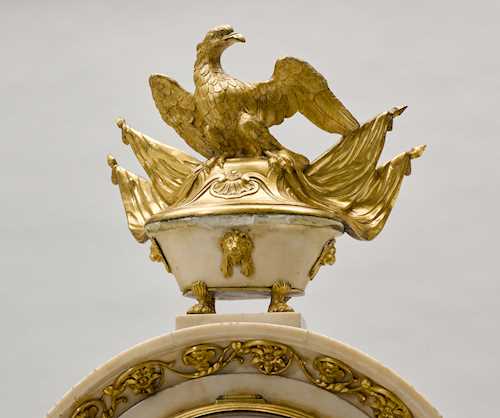 Neo-Classical, Rome, end of the 18th century. Movement, attributable to Luigi (1726–1785) and Giuseppe Valadier (1762–1839).
White and black marble and gilt bronze. Rectangular case, supported by reclining lions, on a rectangular plinth with spherical feet. The top decorated with a tub-shaped ornament, an eagle and banners. Later enamel dial. Parisian movement, striking the 1/2-hour on bell. Pendulum and key, missing.
38 × 18 × 73 cm.
Minor chips in the marble. The tub strongly repaired and with a large loss. Movement and dial, later, ca. 1860.

The magnificent clock on offer can be attributed to the famous goldsmith's studio of Luigi (1726-1785) or Giuseppe (1762-1839) Valadier in Rome. Although their artistic work is well documented, it was only through the studies of the art historian, Alvar González-Palacios, that their activity in the manufacturing of watch cases became known (see "L'Oro di Valadier: Un genio nella Roma del Settecento", Exhibition Catalogue, Rome, 1997). Inventory lists with descriptions of watchcases brought to light by González-Palacios, as well as numerous sketches of the father and son team, which are kept in the Pinacoteca Civica in Faenza, definitively confirm the high activity of the Valadiers in this field.
Some elements of the clock on offer show great similarities with other models of the workshop. For example, almost identical support figures in the form of reclining lions can be found in a musical clock from 1780/1790, which is on exhibit in the J. Paul Getty Museum in Malibu (Inventory No.: 2016.192). The ornamental top in the shape of a winged eagle, in a slightly altered pose, can be found on a clock from the former Carlo Orsi Collection in Milan (cf. Sotheby's auction "Important Furniture, Silver, Ceramics and Clocks", 7 July 2009, Lot No. 59). A partial sketch for another model from the Valadier studio, now in the Pinacoteca Civica in Faenza, depicts a case with the same rounded top or the same space for a rectangular panel below the dial as the present lot (cf. González-Palacios op. cit., p. 137). The attribution of our clock to the Valadier workshop is further supported by a model with the same rounded top. That model which features lion masks, sarcophagus decoration, bow and arrow trophy was assembled by Luigi Valadier and is also described in González-Palacios (see González-Palacios op. cit., p. 137).