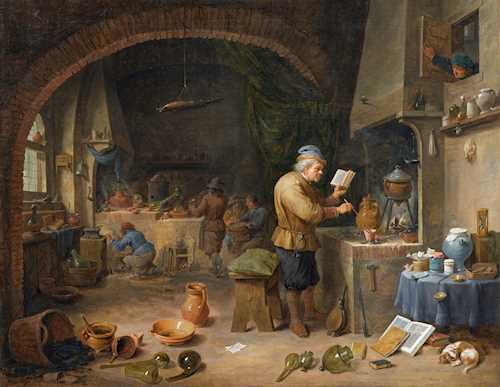 Back
Lot 3032
DAVID TENIERS the Younger
The Alchemist.
Oil on canvas. 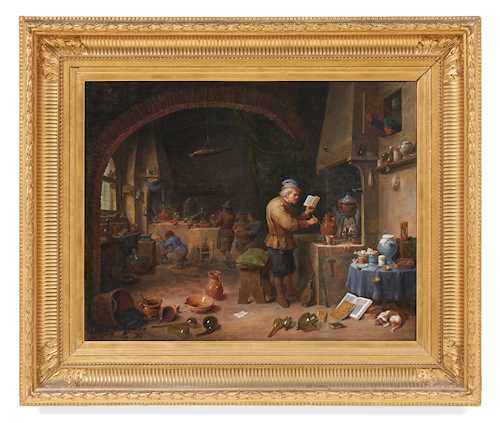 This Alchemist in his Workshop is one of the finest versions by David Teniers the Younger, which Dr Margret Klinge describes as particularly outstanding, having examined it in the original. In a Swiss family collection for over 200 years, this impressive work is now back on the market. Until now, Margret Klinge was acquainted with this work only through the reproduction in the 1877 catalogue of the collection of Mr Bacofen, Basel.

The motif was especially popular in the 16th/17th century and at least a dozen versions are known to exist in the artist's œuvre, as listed by Peter Sutton (Peter C. Sutton et.al.: The Age of Rubens, exh.-cat. Boston and Toledo, 1993, no. 68, p. 421). They always show a scholar in profile standing in his laboratory, reading from books – as in our example – or stoking the embers with a set of bellows. The search for the secret of the "philosopher's stone", with which precious metals such as gold and silver could be produced from base stones, is caricatured here in rich and varied detail, and served to amuse the viewer. Symbolic props such as the hourglass, horse skull, books and empty money bags further allude to human vanity and the nonsensical nature of this endeavour.

David Teniers the Younger was one of the most important Flemish genre and landscape painters of the 17th century. Initially trained by his father, Teniers became master of the Guild of Saint Luke in Antwerp in 1632/33 and was appointed Dean of the Guild in 1645/46. The appreciation of his paintings depicting rural life, especially by the new Spanish Governor of the Southern Netherlands, Archduke Leopold Wilhelm, led to his work being in great demand. In 1650 he was appointed court painter in Brussels.

Dr Margrit Klinge dates this brilliantly painted and very well-preserved depiction of an alchemist in his workshop to this period of his work in Brussels, in the early 1660s.