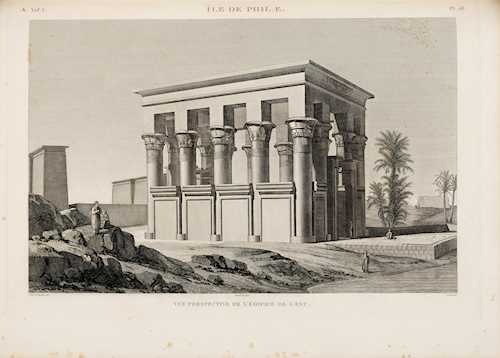 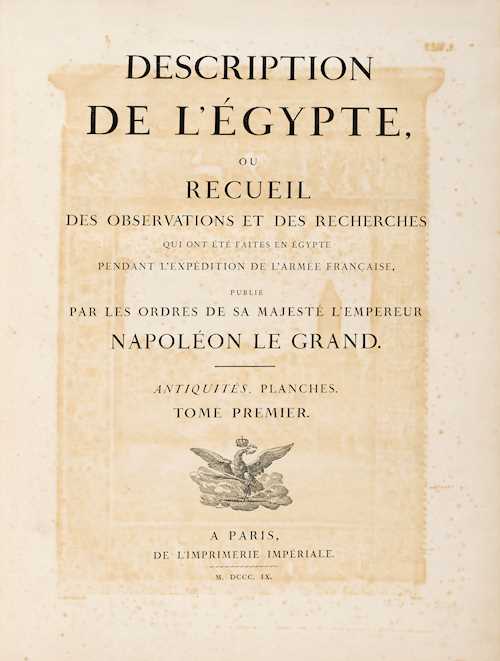 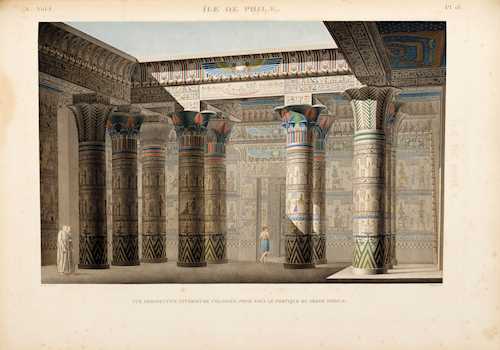 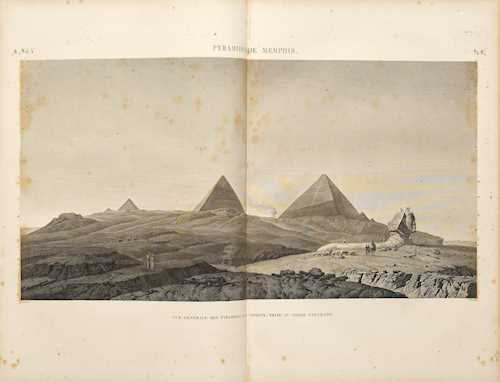 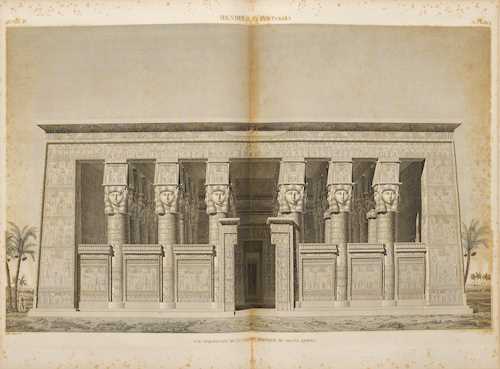 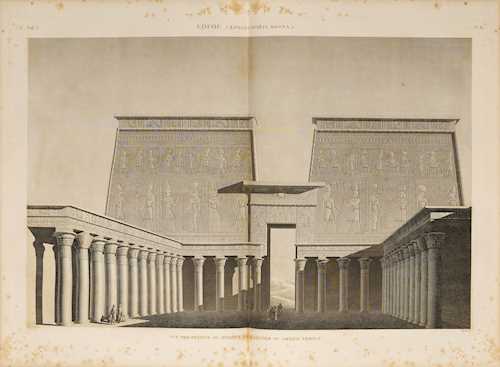 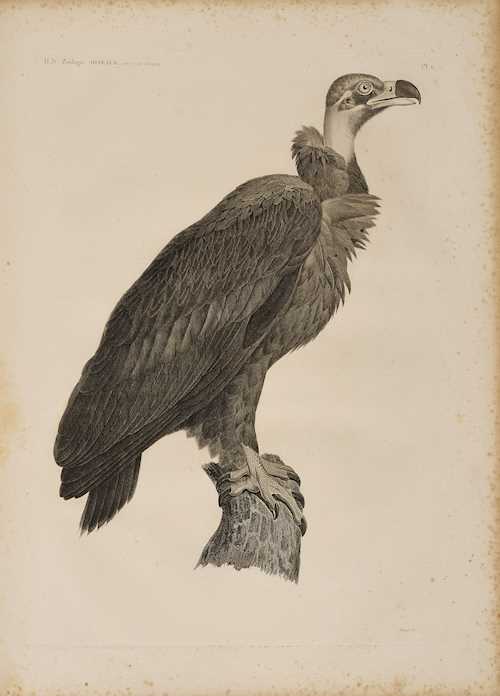 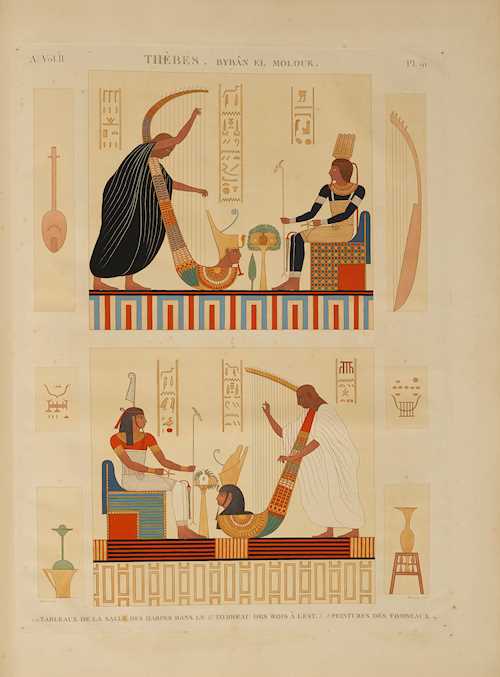 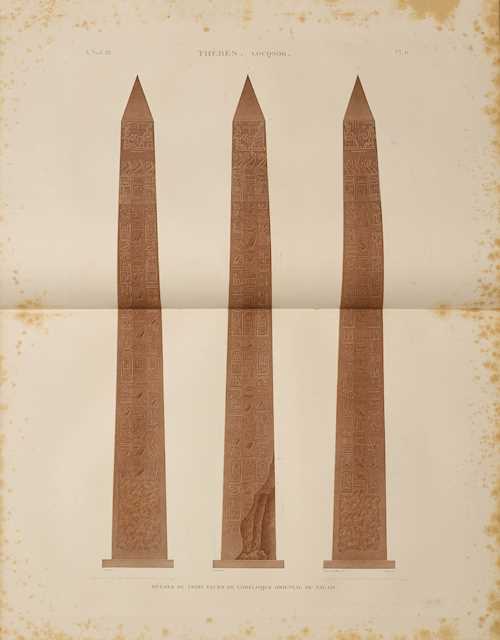 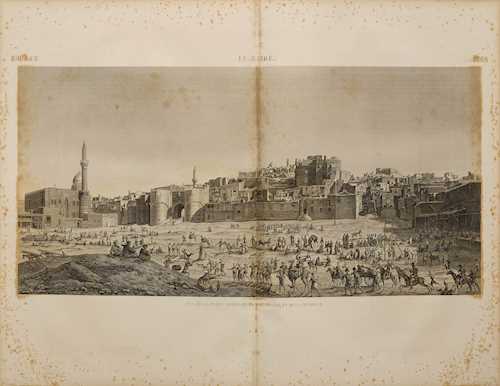 Description de l'Égypte, ou recueil des observations et des recherches qui ont été faites en Égypte pendant l'expédition de l'armée française, publié par les orders de Sa Majesté l’Empereur Napoléon le Grand. 9 text volumes and 11 plate volumes. With double-page engraved title leaf, 1 engraved frontispiece, 2 portraits, 78 (of which 54 double-page and 3 folding) copper-engraved maps, 835 (of which 76 double-page, 24 folding, 39 coloured) copper plates by Bouquet, Letellier after Redouté and 10 (of which 5 folding) tables.
Paris, Imprimerie Impériale and Imprimerie Royale, 1809-1822 [-1830]. Folio (43.5 × 27.5 cm) and Imperial Folio (70.5 × 54 cm). Restored, contemporary full-leather bindings with gold-embossed spine titles, volume and year numerals, gilt inner, standing and outer edges of bindings, gilt edging (spine restored using the old covers, reinforced inner hinges; slightly rubbed, covers partly slightly rubbed, corners slightly bumped).
Atabey 343 - Blackmer 476 - Carré I, S. 143-160 - BAL RIBA 846 - Nissen BBI 2234 - Nissen ZBI 4608 - Brunet II, 617-618 - Graesse II, 366 - Monglond VIII, 268-343 - cf. Ibrahim-Hilmy 239ff. - Röhricht 630, 323 - Tobler 236 - Wilbour p. 178-185 (describes the 2nd edition). - First edition. - The monumental work by Dominique Vivant Denon “Voyage dans la Basse et la Haute Égypte, pendant les campagnes du général Bonaparte”, Paris, 1802, was the prelude to the French “Commission de l’Égypte". Under the direction of the Egyptologist Edmé François Jomard (1777-1862), the “Déscription de l’Égypte” was first published in 1809-1813: “Normally this works consists of 8 folio vols. in 9 (the extra volume being vol 2 part 2 of the ‘Etat Moderne’), 10 volumes of large folio plates and 3 volumes of elephant folio plates.“ (Atabey). As with all previously known copies, the binding and number of plates also varies with the copy presented here. Our suite includes 421 Antiquités plates (Atabey 419), 171 Etat Moderne plates (Atabey 174), as well as 242 Histoire Naturelle plates (Atabey 243), the Atlas comprises 51 plates (as in Atabey). The magnificent work provided an inventory of the ancient Egyptian monuments and a depiction of contemporary Egypt at that time, and served as an art historical inventory that significantly expanded the image of Egypt within Europe: “This intellectual preparation of the knowledge gained during the campaign exceeds the scope, informational value and quality of the illustrations of all previously known work within the context of Egypt research. The Description de l'Égypte comprises plates with objective representation of the monuments as well as depictions of ideal reconstructions of the monuments in colour. ” (Seipel, Wilfried. Ägyptomanie. Vienna, 2000. p. 104, note 23). - “A special engraving machine was invented by Conte especially for this work to enhance the quality of the plates; it is itself illustrated in the work. The fact that production took almost twenty years, the work being issued in livraisons, with the subsequent vagaries of binding, means that each copy differs to a certain extent. This is particularly so with reference to the coloured plates. It may have been the case that subscribers were allowed to make their own choice picking plates at random from each section, although the geological plates seem always to be coloured... The impulse which prompted Napoleon to take a scientific commission with him on his expedition to Egypt was probably driven by his desire for glory and his attempts to emulate Alexander the Great, who had also taken scientists and savants with him on his expedition to India. Whatever lay behind the impulse, the results were both tragic and grand: many of the scientists, orientalists and artists Napoleon recruited never returned from Egypt, but the mass of material which they accumulated gave Europe its first great appreciation of both the ancient and modern Egyptian worlds and provided the basis for most of the 19th c. archaeology of Egypt..." (Atabey). - Somewhat foxed throughout and mostly in the margins, partly full-page browning, only occasional plates with small tears in the margins. - Provenance: Engraved bookplate with the coat of arms of the English Duke of Northumberland with banderole of the Order of the Garter on each front pastedown, “A crescent argent within the horns, per pale, sable and gules charged with a double manacle fesseways or” (Burke & Burke 1884, Art. “Percy”) - Swiss private collection over multiple generations.