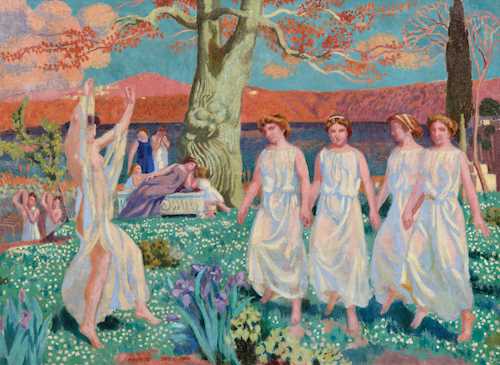 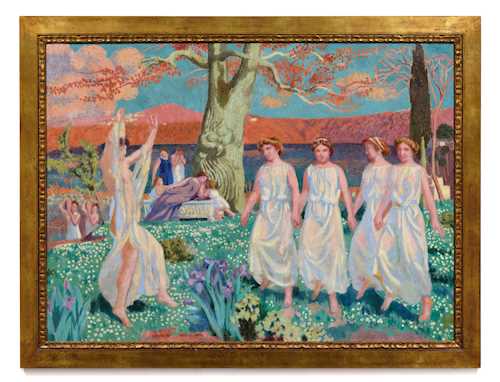 Provenance:
- Galerie Eugène Druet, Paris.
- Alfred und Hanna Wolff collection, Munich/Berlin, acquired from the above gallery in 1905 and since then owned by the same family.

The motif of the present painting is borrowed from Greek mythology: Alcestis, the most beautiful daughter of Pelias, the king of Iolcus and son of Poseidon, sacrificed herself in place of her husband, Admetos, but was then saved and able to return to him unscathed.

This motif was not only popular in the visual arts, but also in literature and music. From the end of the seventeenth century to the end of the eighteenth century, five operas were composed on this theme. Hugo von Hofmannsthal, who incidentally belonged to a circle of artist friends with whom the Wolffs also met regularly, wrote the drama Alkestis in 1911.

The painting's impressive size and variety of colours alone are captivating. Denis has completely reinterpreted the classic model of an Italian landscape (see the Paysage d'Albano mentioned in the title) as a secondary backdrop for the meaningful figurative scene (here the Tragedy of Alceste).

In 1906, the Wolffs had a doll's house made for their daughter Marcella that exactly reproduced in miniature the furnishings of the rooms of their home in Munich. A miniature version of Denis's 'Danses d’Alceste, Paysage d'Albano' was reproduced on one wall of the salon (Fig. 1).