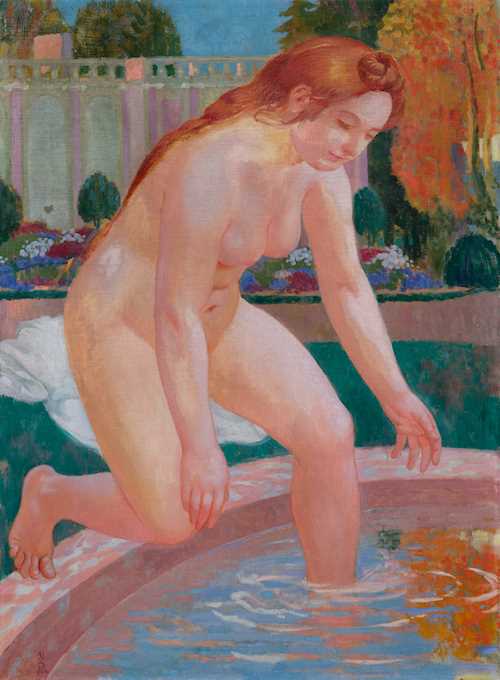 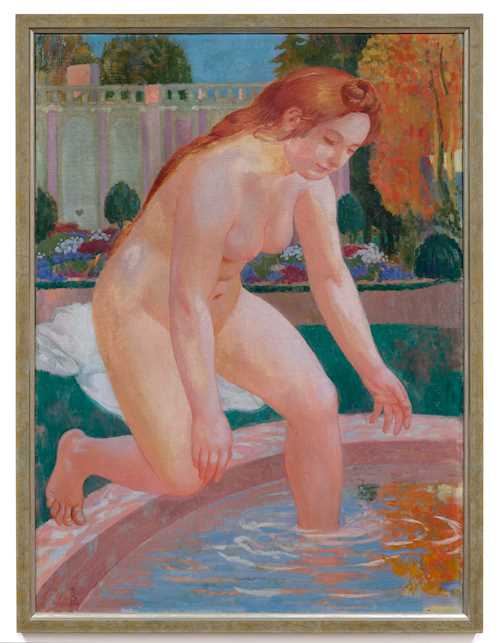 Provenance:
- Galerie Eugène Druet, Paris.
- Alfred und Hanna Wolff collection, Munich/Berlin, acquired from the above gallery in 1904 and since then owned by the same family.

Maurice Denis and the Alfred und Hanna Wolff Collection
Both paintings by Maurice Denis offered here (lot 3210 and lot 3214) come from the estate of the Alfred and Hanna Wolff Collection. A lawyer and banker, Wolff and his wife Hanna met the Belgian architect and designer Henry van de Velde, who later lived in Switzerland, around the turn of the century and subsequently had several homes furnished by him. Van de Velde’s influence was not limited to the furniture, lighting, carpets, curtains and wall coverings of the interior of the residences; he was also instrumental in the procurement and inspiration of their art collection. Thus, it was also Van de Velde who provided the design for the frame of Denis's 'Danses d’Alceste, Paysage d'Albano' (Lot 3214). In the years between 1903 and 1910, the Wolff's invested the most in Denis, along with works by Maillol and Signac. The artist later visited the Wolff residence in person to view 'his' paintings in the salon.

After the war, Wolff withdrew from banking to focus exclusively on his activities as an independent gentleman, art collector and patron of the arts. Both works by Maurice Denis that we have the privilege of offering in this auction were acquired by the Wolffs in 1904 and 1905, probably on the recommendation of Henry van de Velde, directly from the gallerist Druet in Paris and have been in the same family collection ever since.


Denis's painting 'Grande Baigneuse ou Suzanne au bain' is taken from a famous subject in the biblical narrative. However, in Maurice Denis’s depiction of Susanna at her bath, there is no longer any sense of the menace and indecency of the two old judges who observe and later accuse her, as is the case in many earlier works. Denis's Susanna is a very 'ordinary' young woman who has removed her dress and is about to take a bath in the fountain of a park on a fine summer's day. The emphasis on colourful surfaces, as seen in the rendering of the flowers, bushes and trees in the background and the reflections in the water, is characteristic of Denis.