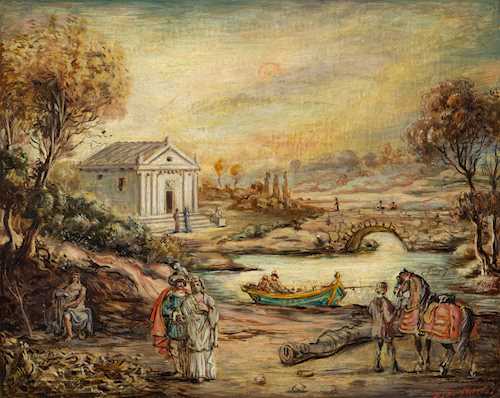 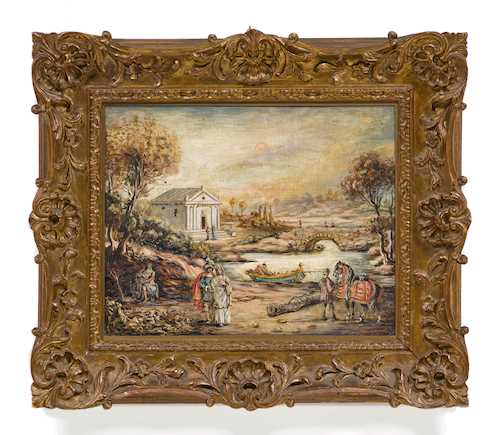 Hardly any other artist underwent such a large artistic transformation during his career as Giorgio de Chirico. Formerly the main exponent of "Pittura metafisica", De Chirico’s break from his proto-surrealistic paintings is represented in the present work. This metamorphosis towards a historicising style can be understood as the artist’s turn to the painting of the Old Masters, employing a dry, fresco-like handling of paint inspired by the Italian Trecento and Quattrocento. Since his artistic beginnings, and especially stemming from his Munich years of 1906-09, he had developed a fascination for the art of Arnold Böcklin that condensed into a dramatic neo-baroque idiom in his late work. Not only De Chirico’s style, but also his subjects were informed by this historicising premise, as seen in the horses in armour, ancient temple architecture and picturesque landscape in the present work. The development of his pictorial vocabulary towards Greco-Roman antiquity, possibly also a reflection of his youth in Greece, is an expression of De Chirico's criticism of the “commedia dell’arte moderna”, a polemic particularly directed towards French painting of the 20th century and Cézanne. In the 20th century, art history largely considered only De Chirico's early artistic production as relevant and showed little interest in his later creations. This retrospective glorification of his early work and simultaneous disdain of the works produced after his artistic turning point does not do justice to the artist’s oeuvre. Julius Meier-Gräfe's statement that it is not easy for a great artist to make bad work is much more likely to hold true.