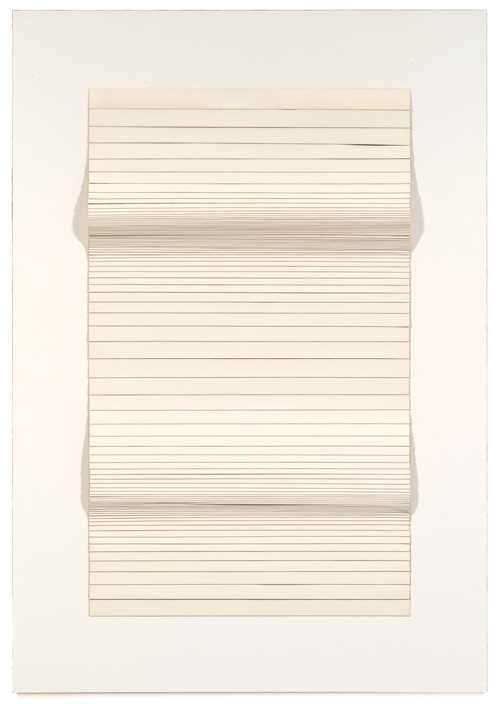 Leo Erb has made this age-old maxim his own in the way that he creates his art. Line and light, bound to the colour white, are the major themes of his works.

The parallels between Erb's work and the objectives of the Zero movement to create an art of light, monochrome and structure are unmistakable and indeed Erb took part in the 7th exhibition of the Zero group "Das rote Bild" in Düsseldorf in 1958 with his structured "Linienbilder" and "Linienreliefs". Nevertheless, his path towards a radical reduction of pictorial elements was an autonomous one. His artistic training in lettering and shading at the Werkkunstschule Kaiserslautern from 1940 to 1943 familiarised Erb with the possibilities of linear design and with the laws of light and shade. During his studies at the School of Arts and Crafts in Saarbrücken in 1946 and 1947, he became acquainted with the pictorial ideas of the Bauhaus tradition: working in accordance with the materials, the intrinsic value of the pictorial medium and reflection on its use and expression. Through personal experiences such as his exposure to the vast snowy landscapes of Russia in the winter of 1942/43, Erb came into existential contact with the colour white and the line.

At a very early stage, Erb therefore elevated the line to the absolute object of the picture, freed it from its functional role and detached it from any context. As in the work offered here, the lines in their serial arrangement provide structure to the surface on the one hand, modelling the sculptural form and spatial relationships through ratios of light and shade and by compressing or expanding the distances. White is colour, light and brightness at the same time, combining material and immaterial qualities. The quiet, white expanse of the work contains within itself the openness of intellectual possibilities, which the artist rightly associates with the dimension of freedom. As absolute as Erb's works are in the reduction of their pictorial elements and the adherence to a logical structure, they also prove to be ambivalent and open.