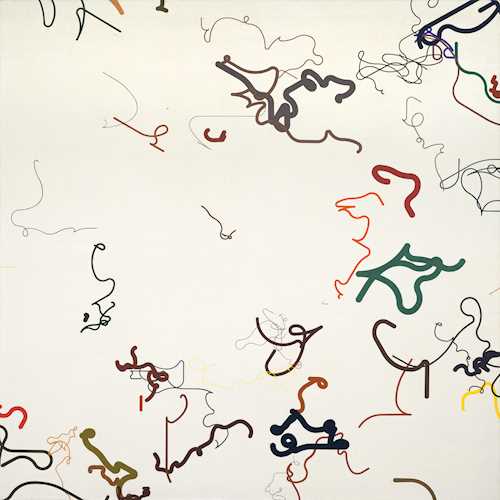 Provenance:
- Purchased probably from Galerie Hofmann, Munich, by the previous owner.
- By descent to the present owner, since then private collection Switzerland.

"Chance as an instrument for constructing lines and for changing their character and spatial relationships is for me the most powerful expressive resource I have found so far. This process connects me with everything I perceive, think and experience. My feeling, knowledge and perception are reflected in my paintings." Zdeněk Sýkora

The Czech painter Zdeněk Sýkora was one of the most high-profile and innovative exponents of abstract, concrete and constructive art. The computer art pioneer gained worldwide recognition for his line paintings, which were created from 1973 onwards.

After studying art education, descriptive geometry and sculpture, he initially devoted himself to landscape painting. "Painting in nature was most effective for the cultivation of artistic perception [...]. In nature at the easel, they suddenly began to understand that artistic perception of the world is about a specific quality of things, about the relationship between things," said Zdeněk Sýkora, as the lecturer, who constantly enriched his students’ learning with personal experiences and specialist skills from his own life.

By reducing natural forms and colours, the artist gradually arrived at a geometric abstraction with a systematic pictorial composition: the structural pictures. With these, the artist found a pictorial solution for the relationships between form and colour. In order to be able to calculate the random distribution of geometric forms mathematically and to conceive his pictures, from 1964 Zdeněk Sýkora became one of the first artists to make use of the computer.

At the beginning of the 1970s, a renewed artistic process began, in which he concentrated on the surface contour in the form of a line. Released from the structural grid, the line allowed him greater painterly freedom, to which he turned with great conviction from 1973 onwards.

The present work, "No. 12", from the series of line paintings, looks to the viewer like a tangle of colourful streamers. It was created in 1981. Zdeněk Sýkora painted various forms of lines: narrow and wider lines, lines that move only in some randomly chosen directions, short-lived lines and even clusters of lines. The bright and playful, large-scale work is based on the principle of chance, which is the foundation of the line paintings. The shapes, length, width, colours and intersections of the lines are determined by random numbers generated by the computer. Although Zdeněk Sýkora worked with systems, programs and the progressive principle of chance, he always remained true to painting and dealt with shapes, colours and their mutual relationships in an original way.

What is fascinating and very unusual within the sphere of concrete art is that he, an exponent of non-objective painting, who was acclaimed throughout the world, at the same time continued to paint landscapes into old age.

To this day, Zdeněk Sýkora is one of the most important artists in his country. His works are represented in international and Czech collections.

Sold for CHF 1 028 800 (including buyer’s premium)
All information is subject to change.