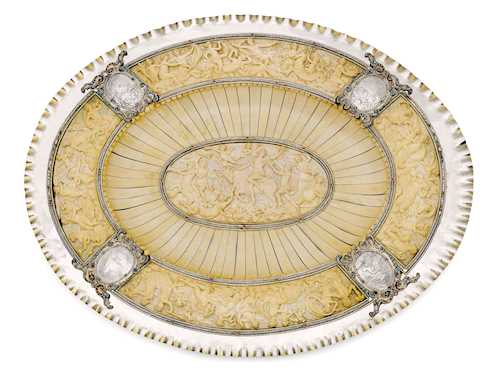 Sold for CHF 18 600 (including buyer’s premium)
All information is subject to change. 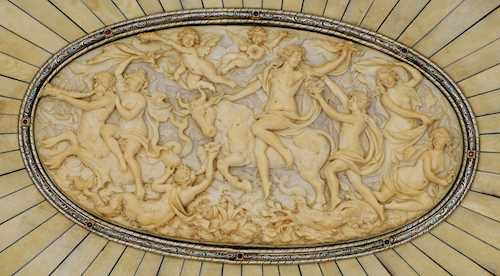 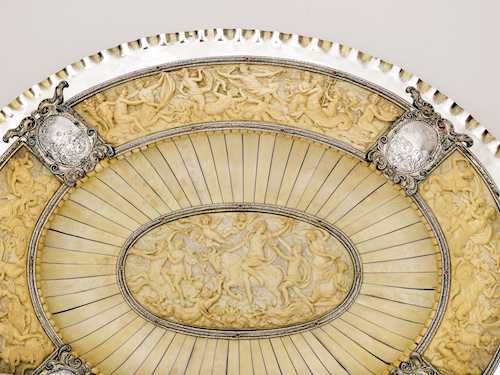 Germany, ca. 1860/80.
Ivory, carved in relief, and silver, in part enameled. Mounted on a bowl in dark stained oak. Oval shape, the mirror with a relief depicting the Abduction of Europa by Zeus. The wide rim set with four semicircular reserves depicting mythological dances of aquatic creatures, and with four silvered medallions with mythological depictions, in a scrolled frame with polychrome enamel inlays and glass stones. Dutch import stamp: J.
77 x 60 cm.
This object contains material of endangered species and is subject to certain trade restrictions. Prospective buyers should familiarize themselves with relevant customs regulations prior to bidding if they intend to import it into another country.

Minor chips and losses to the ivory and enamel.

Such opulent bowls or plates enjoyed great popularity as showpieces, especially in the 17th century. They had no functional purpose, but were purely decorative. As a rule, they consisted of a set of a plate and a jug. Basically, the plate on offer follows the structure and design of the Baroque works, such as the Venus bowl or Galathea bowl by Johann Michael Maucher (1645-1701), which is kept in the Museo Civico in Bologna (Cf. Eugen von Philippowich: Elfenbein, Braunschweig 1962, p. 259, Ill. 196.). With respect to the silver mounts, the plate on offer also shows a great similarity with a plate in the Kunsthistorische Museum in Vienna, which originates from the Augsburg and Nuremberg area and is dated 1664. The theme of the Abduction of Europa in the mirror is also present in that plate (Kunstkammer, Inv.No. 4459).
Such showpieces experienced a revival in the 19th century and were accordingly produced in large numbers. Compare, for example, a Bacchanal plate from around 1880 (Meinrad Maria Grewenig (Ed.): Macht & Pracht. Europas Glanz im 19. Jh. Privatsammlung Achim Neuse und Volker Wurster, 2006, p. 126) or an opulent plate featuring Apollo, which is dated 1889.

Sold for CHF 18 600 (including buyer’s premium)
All information is subject to change.