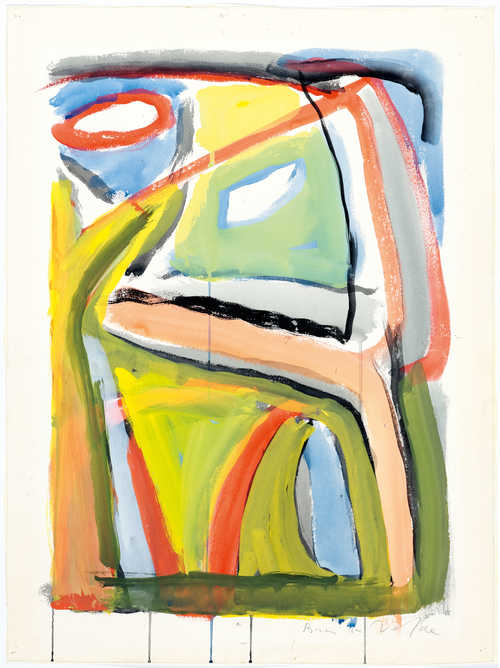 Abraham Gerardus van Velde was born in 1895 in the Netherlands. His family had to move several times during his childhood, as they struggled with poverty after the collapse of the family business. The young Bram Van Velde was trained as an interior decorator in La Haye. In order to support his family financially he pursued this line of work but developed an affinity for fine art and felt that he was called to a higher profession: he wanted to become an artist. He enrolled at the Mauritshuis Art Museum of The Hague, in order to copy the Old Masters. From then onwards Bram Van Velde would often change his place of residence at relatively short intervals. Each of these stages in his life would contribute to him finding his style. The periods in The Hague, Munich and Worpswede (near Bremen) are characterised by expressive landscapes and still lifes of an expressionist style. During his years in Paris, Meuten, Mallorca and Spain, his works became gestural-abstract. Furthermore, Van Velde worked on lithographs and book illustrations, including illustrations for some works by Samuel Beckett, with whom he became friends in 1937.

His oeuvre is known today for his abstract expressionist painting. Guided by his feelings and the urge to portray the unconscious, stylistically he is close to Informel Tachisme and French Lyrical Abstraction. His works are characterised by recognisable shapes, figures and lines, often geometric. Despite the uneven lines, irregular flow, scattered flecks and drops of paint, there is a prevailing decisiveness in the structures. The forms of his compositions appear as in a state of great tension in relation to each other, due to the luminous and subtle choice of colours, in search of weights and balance between the individual colour surfaces.