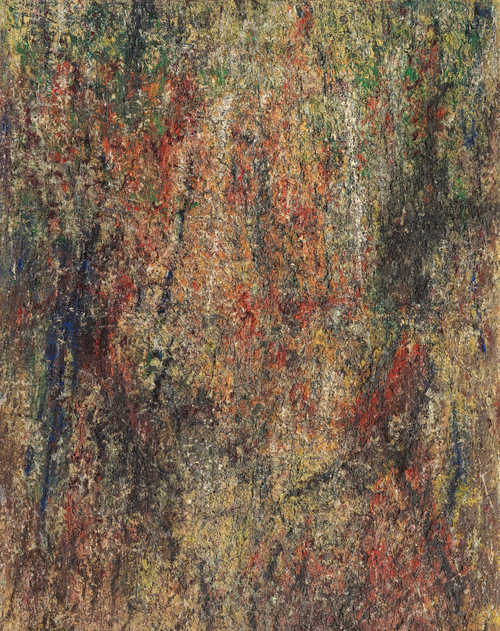 Sold for CHF 44 900 (including buyer’s premium)
All information is subject to change.

Born in Hungary, the young François Fiedler began painting at the age of 5 and by the age of 10 he was already copying the greatest masterpieces. His works were shown in public exhibitions and competitions and were acquired by Hungarian state institutions such as the Municipal Gallery and the Museum of Fine Arts in Budapest. After completing a classical training at the Hungarian Academy of Arts in Budapest, in 1945 he moved to Paris, where he got by with small commissions, making copies of paintings for museums. Very soon François Fiedler discovered abstract painting and was tireless in his study of its multifarious forms and techniques.

In those first months after the war, group and solo shows were organised, including the Salon des Réalités Nouvelles and the Salon de Mai. In 1946 Joan Miró discovered a canvas by Fiedler in a small gallery and was impressed by his accomplished style as well as his innovative spirit of freedom and curiosity and decided to introduce him to the art dealer Aimé Maeght. This was the beginning of a successful 25-year collaboration. Maeght ensured that he was represented in a large number of exhibitions and was presented amongst the most important artists of the 20th century. Alongside painting, Fiedler also experimented with etching techniques and from 1954 to 1977 no fewer than four issues of the magazine “Derrière le Miroir” were dedicated entirely to him.

The present painting is reminiscent of the work of the American Abstract Expressionist Jackson Pollock, whose unique technique had inspired Fiedler. Like Pollock, Fiedler allowed himself to be guided by spontaneity, for the work to be initiated, for it to develop and take shape until a complete unity emerged. François Fiedler’s works have something sculptural about them, they harbour a powerful depth, through the dense overlaying of strokes and layers of paint. The layer of paint is tightly packed with only a few gaps as far as the primer.

The viewer stands before what seems like a solid whirlwind, produced by the power of painterly skill.
The artist often had his large format canvases dry outside in the open air, knowing that the wind and dust could leave their traces. The thick layers of paint applied in quick succession, crucially favoured the formation of early surface cracks. There is a deliberate rawness as a consequence (Lots 3406 and 3413). Fiedler distinguishes his canvases by having lasso-shaped lines float over almost monochrome backgrounds. Some of the lines are closed, while others extend over the edge of the canvas. With these clearly defined lines, Fiedler produces a harmonious yet lively spontaneity.

François Fiedler’s works are present in important museums and galleries, including the Fondation Maeght in Paris and the Guggenheim Museum in New York.

Sold for CHF 44 900 (including buyer’s premium)
All information is subject to change.