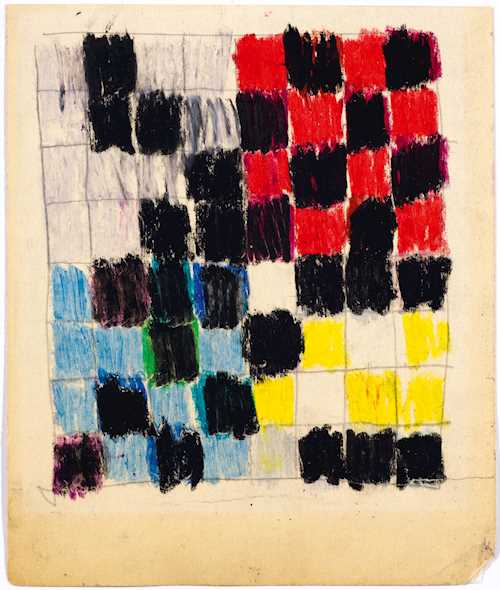 (1910 Paris 2005)
Untitled. 1960.
Oilpastel on firm wove paper.
Monogrammed on the reverse: N., also inscribed: Re Rom 52.
20 x 17 cm.
Provnance:
- Galerie La Ligne, Zurich (verso with the label).
- Purchased from the above by the present owner, since then private collection Switzerland .

After a 20-year period of learning and training, Aurélie Nemours, born in Paris in 1910, held her first exhibition in 1944. Before that, the young student acquired a solid theoretical base. At the École du Louvre she studied Egyptology, Byzantine Art, Roman Art, Spanish painting and Modern Art. From 1937 until 1940 she decided to turn to the practical side and began to work with the graphic designer Paul Colin. From 1941 she enrolled at the academy of the painter and art theorist André Lhote, in order to be able to learn and apply the fundamentals of painting. After the Second World War, the young artist changed atelier again in order to be taught by the Cubist and Constructivist painter and graphic artist Fernand Léger, who had returned from exile in the United States, shaped by the liberalism and sensitivity of painting there. These were aspects which later played an important role in Nemours’ oeuvre. She never deviated from her chosen path, namely that of abstract geometric art. She dedicated her life to developing an unbelievable variety within this one area.

From 1953 Aurélie Nemours used a limited number of forms in her pictures: lines, dots, square or rectangular surfaces, which always run parallel to the horizontal and vertical boundaries of the pictorial support. Only a few colours occur in her entire work: black and white are mostly present. The colours which generally cover large areas, are without structure and are mostly applied smoothly. Each motif is unambiguously abstract. Her first, still unpolished works are mostly compositions which are based on a network of lines which develop over the surface. The chess board grid, as in the work presented here, is one of her most elaborate patterns. Thus, with the superimposition of the colours and the geometric forms, a composition is created which works as a whole. This pure and minimal choice of form, as well as an almost strict simplification, are the result of long research using numerous pastel sketches. Her entire work is a testament to a high degree of sensitivity.

Towards the end of the 1950s she began to paint in series. Her first series was entitled “Au commencement” and was followed by “Romantiques” (presumably the pastel works presented here are from this series, since they are inscribed verso in pencil “ROM”), “Échiquiers”, “Rosaces”, “Diptyques”. She usually researched her series in pastels, as well as in sketch form, which enabled her to work towards an end result.

Aurélie Nemours received a lot of support from artist friends such as Herbin, who discovered her at the beginning of her career, Jean Arp, Jean Gorin and also one of her first collectors Gottfried Honegger, who never ceased to promote her as one of the most important artists of her generation.

“For me, things come about much more through intuition than through the will. In my youth I practised a bit of the Surrealist “écriture automatique” (automatic writing). I work in pastel. When I start, I have to tune in: your head has to be in the right place. I look for emptiness, then I throw my ideas down on paper, without analysing them. You must not stop, nor decipher, otherwise nothing happens. In this phase my most important material is solitude; during the execution phase, then time is most important.” (Aurélie Nemours. From: Lemoine, Serge. Pastels d’Aurélie Nemours. 1989. p. 14)