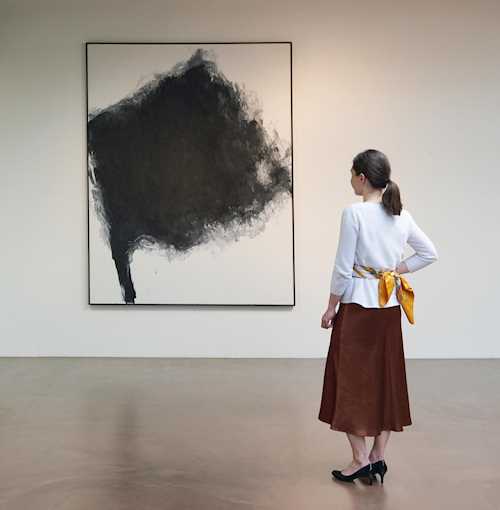 Armando was born Herman Dirk von Dodeweerd in Amsterdam in 1929. The multi-talented artist was one of the most important Dutch artists within contemporary art. Armando spent his youth in Amersfoort, where he experienced the National Socialists and the concentration camp at close quarters. Although Armando studied art history and philosophy at the University of Amsterdam from 1949 to 1954, he was self-taught when it came to learning the basics as a painter, writer, poet, sculptor, musician, theatre and film maker. He gradually discovered a passion for drawing, painting and writing. From 1979, the artist lived in Berlin, his second home, creating large-format paintings with meaningful titles in black and white and soon achieved his international breakthrough as a painter.

The cumulative experiences of death, suffering and pain, of good and evil, guilt and innocence, as well as the confrontation with the horrors of the Second World War run like a continuous thread through Armando’s award-winning artistic and literary oeuvre, which depicts the tragedy of man in all its facets. "I suddenly had a great interest in the perpetrators out of too much sympathy for the victims," Armando later recalled. "I had found my subject." The two abstracted and starkly contrasting works on offer from the "Flags" and "Battlefield" series hark back to Armando's youth.

Where black and white collide, grey-looking clouds often form, as if there were a struggle for supremacy in the painting triggered by the expressive application of paint. The artist has deliberately painted the present works without colour, thereby lending them a pervasive visual power. By adding sand to the upper layers, he also obtains a dramatic effect.

The flag is already a symbol in itself. Its threatening nature, historical significance and the triumph and defeat with which it is associated, prompt the artist to use the much-torn and frayed black flag flapping against a white background as a motif in his series of works.