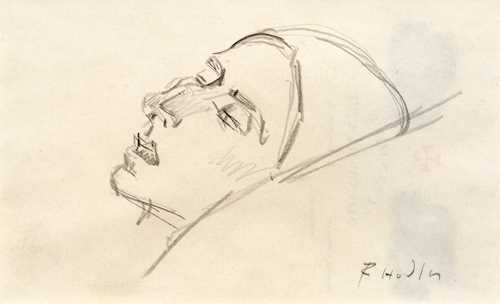 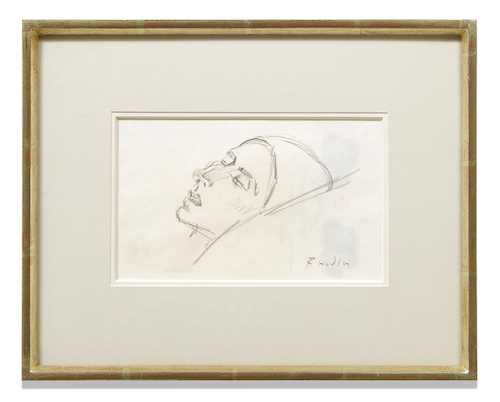 Valentine Godé-Darel and Ferdinand Hodler first met in 1908. This was the beginning of a passionate relationship that resulted in their daughter, Paulette, born on 13 October 1913. At that time, Valentine was already ill and had to undergo two operations in February and May of 1914, which unfortunately were not successful. The suffering lasted until 25 January 1915, the day Valentine Godé-Darel succumbed to her illness at her home in Vevey.

Ferdinand Hodler not only took care of his beloved Valentine, but he also recorded her illness, her physical decline and her suffering up until the end in a powerful series of incredibly moving and completely honest paintings, drawings and small sketches that is unique in European art history.

The drawing offered here from the Karl Steiner Collection was produced on 31 May 1914, one day after the second operation. According to Jura Brüschweiler, the fact that the present work was not drawn on lined notebook paper, but instead on white Fabriano paper and was fully signed by the artist establishes that Hodler created it as a completely autonomous work of art and not as a preparatory sketch. “In drawings such as these, the artist succeeds in finding beauty even in physical decline and mental suffering and in confronting death with something that can outlast it for all time”. (Jura Brüschweiler)

Sold for CHF 19 820 (including buyer’s premium)
All information is subject to change.