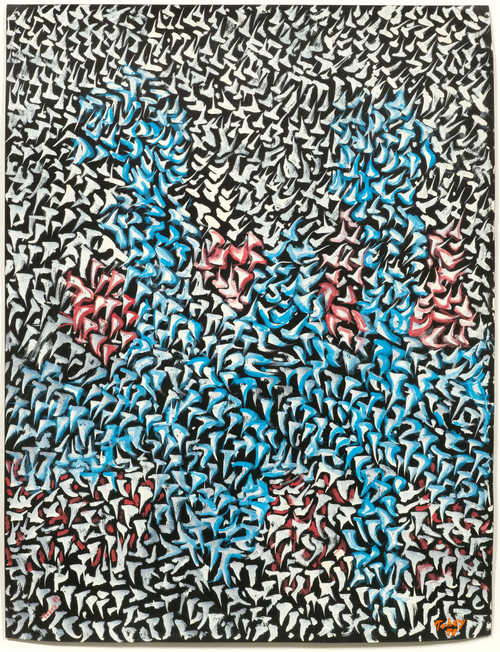 When Mark Tobey painted the present work “Blue Interval”, he had already been living in Basel for 10 years. In 1960 the husband and wife collectors Ernst and Hildy Beyeler bought 40 works from the artist. By then Mark Tobey had already achieved international renown, had been awarded a number of prizes, and had successfully taken part in the Biennial and Documentas II and III.

At the age of sixteen Mark Tobey moved to Chicago, where he attended courses in oil and watercolour painting at the Art Institute and earned money as an industrial designer at a steel mill. In 1911 he moved to New York, where he worked as portrait painter and fashion illustrator for Vogue magazine. During his time in New York Mark Tobey discovered and professed the teachings of Bahāʾullāh, which aspired to create a union from the diversity of the great world religions and so to form a common source of wisdom. He finally moved to Seattle, where he taught at the Cornish College of the Arts, and where he became fully immersed in Chinese painting. From 1925 he began to travel the world: he stayed in Paris and the Near East and also made a longer trip to China and Japan, where in a Zen monastery he became involved with Zen teaching and painting and also with calligraphy. At the same time, he also had a foothold in England, where he taught at the Dartington Hall School in Devonshire between 1930 and 1938. “Always in movement – that is how the Greek philosophers saw the essential being of the soul – so, I have tried to tear out just a few scraps of that beauty which makes up the miracles of the Cosmos and which is in the multi-facetedness of life.”

Through his many years of involvement with calligraphy, Mark Tobey developed his own pictorial script; he never had the aim of imitating the East Asian pictorial language, but of finding his own personal style with his western influence. “I have never tried to pursue a particular style in my work. Form, the road has been a zig-zag into and out of old civilisations, seeking new horizons through meditation and contemplation.” Tobey lived out his universalism as a lone agent, and left behind the patterns and traces of his life in his work. His abstract expressionist paintings with their fine, fleck- or streak-like dense style (see also Lot 3408) create an effect which is both energetic and yet exude an unshakeable sense of harmony. He is inspired by nature, where he tries to see an abstraction, within which a most profound, rhythmic plasticity is hidden. “Since I try to make my paintings organic, I feel that there is a relation with nature. (...) I wanted to experience through the medium of paint a feeling of the movement of grass and floating seeds.”

He is one of the most important precursors of American "Abstract Expressionism". In 1974 the first large retrospective was shown at the Smithsonian Institution in Washington. The much-travelled Mark Tobey spent the last 16 years of his life in Basel.

Sold for CHF 140 900 (including buyer’s premium)
All information is subject to change.