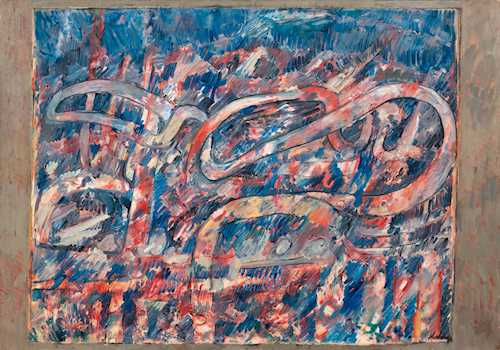 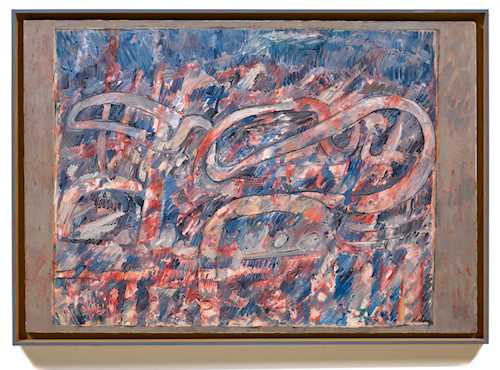 (Brussels 1927–lives and works in Paris)
Untitled. 1958.
Oil on canvas.
Signed lower right: Alechinsky, as well as numbered on the reverse: 16.
81 × 116 cm.
The authenticity of this work has been confirmed by the artist himself, Pierre Alechinksy. We thank Pierre Alechinsky for his very kind support.

“Of course, when one is faced with a canvas, one is no longer alone, and the sense of solitude diminishes. This can be an agreeable passage of time. In fact, solitude then becomes a kind of companion.”

With his sweeping brushstrokes Pierre Alechinsky creates extraordinary figures in a fantastic pictorial cosmos. His wealth of motifs seems endless, populated by animals such as snakes or mythical creatures, volcanic eruptions, trees, ships, fish, and the seas. The subject is not predetermined, and the picture develops as it is being made. The works arise from the interplay of the painter's physical action, spontaneous association, and playful transformation of the motif.

Under the influence of Surrealism, Pierre Alechinsky developed an autonomous pictorial world and expressive form of figuration. After a trip to Japan in 1955, his painting style changed. His work became lyrical, full of fantasy and cultural echoes, which clearly spanned a bridge between Western European and Asian culture.

The "Remarques Marginales", as they are known, are the recurring margin drawings which are characteristic of Alechinsky's oeuvre. They may be wide and richly decorated or, as in the present painting, monochrome. In either case they work with centre of the picture to form a unit - the calm grey-beige margin frames the bright blue-red organic riot of a landscape.