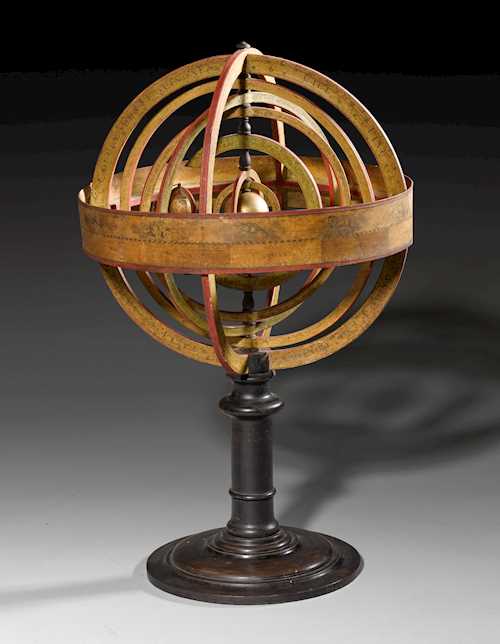 Back
Lot 1809
COPERNICAN ARMILLARY SPHERE
Made by Delamarche or Fortin, France
around 1790-1820
Mounted on an ebonized wooden stand with turned central pillar and base
54 x 36 x 36 cm 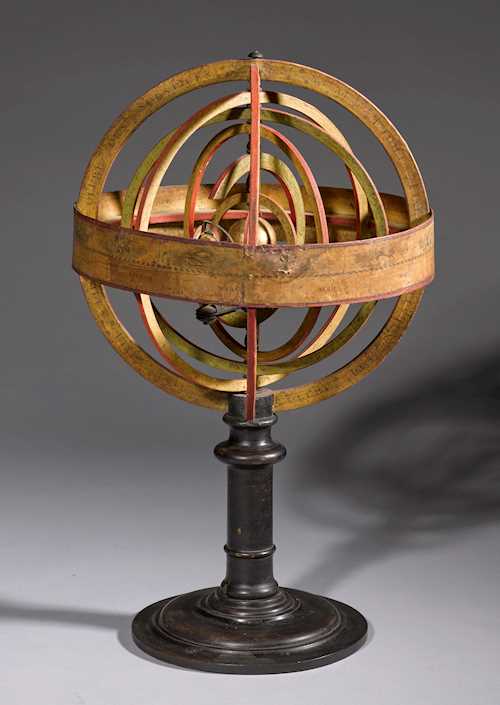 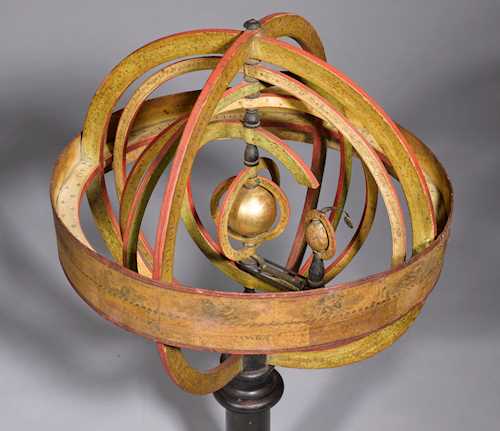 Made by Delamarche or Fortin, France
around 1790-1820
Mounted on an ebonized wooden stand with turned central pillar and base
54 x 36 x 36 cm
Armillary spheres are astronomical demonstration devices designed to show basic principles of the solar system to students and scholars. Armillary spheres date back to ancient Greece and were produced in England, France and Europe in the 18th and 19th centuries and continued to be manufactured in the 20th century.

An armillary sphere with the sun at the center is known as Copernican named after the astronomer Nicolaus Copernicus (1473-1543) who formulated a model of the solar system in which the planets, including the Earth, revolve around the Sun.
A Copernican armillary sphere generally illustrates the revolution of planets (and asteroids) within the solar system with a central sun sphere surrounded by either concentric planetary rings or an internal orrery with discs or spheroid planets.

In the center of the structure is a vertical brass rod supporting a gilt sphere representing the sun, surrounded by an orrery comprised of the 6 rotating curved brass arms, each ending with a disc indicating a planet or asteroid. In addition, the orrery has a spherical (rather than disc form) Earth — rotating on a separate apparatus — that is painted with a simple map of the continents, and set within a pasteboard meridian with applied engraved paper. Earth also has a rotating moon disc attached to the meridian by a brass arm.

The here presented example is in wonderful condition, showing barely any restorations or damage. The printing on the outer ring is clearly visible and the whole armillary sphere shows almost no traces of use.