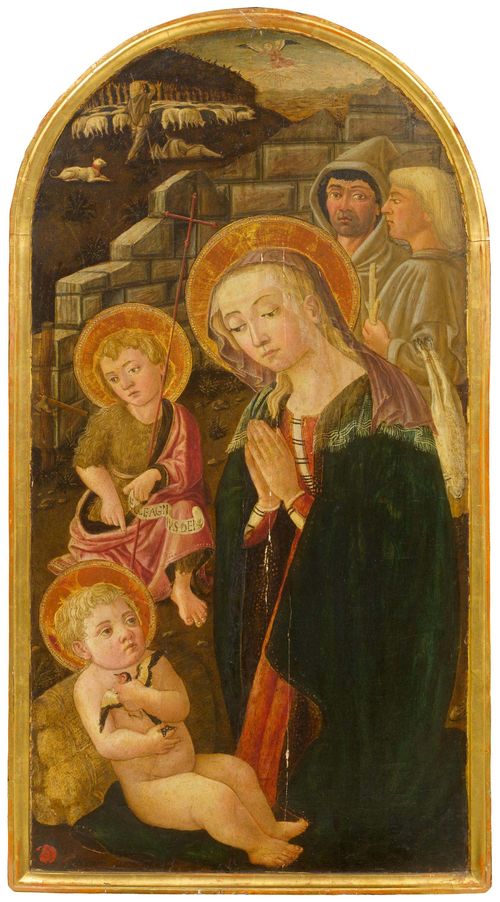 (active in Florence circa 1460-1499) Adoration of the Child, with the Shepherds and Saint John the Baptist. Tempera on panel. With red wax seal lower left. 88.5 x 46.5 cm. Provenance:–Collection of the miniature painter August Grahl (1791-1868).–Collection of Bevilacqua La Masa, Venice, until 1900.–Galleria Sangiorgi, vendita Bevilacqua La Masa, 15-22.10.1900, Lot 471.–Collection of Marcello Galli-Dunn, Badia castle, Poggibonsi, 1900-1905.–Galleria Sangiorgi, Rome, Collection of Galli-Dunn, 1.-6.5.1905, Lot 323 (as attributed to Cosimo Rosselli).–Swiss private collection. Literature:–Berenson, Bernard: Catalogue of a collection of Paintings and some Art Objects, I, John J. Johnson Collection, Philadelphia 1913, S. 35 (as school of Cosimo Rosselli). As with the two other devotional paintings from the Florentine Renaissance presented in this catalogue (Lot 3004 and lot 3006), the idea for this painting was taken from Filippo Lippi. It was a very popuelar motiv in Florence and therefore frequently commissioned. This panel, which depicts the Mother of God kneeling whilst praying in front of the child with the Baptist as a boy and two shepherds by her side, can be seen as one of many variations of a panel by Domenico di Zanobi who was formerly given the name Maestro della Natività Johnson (E. Fahy, in: Paragone 17,1966, S. 17-28) in regard of his painting "the adoration of the Child" from the Johnson collection in Philadelphia (Strehlke, C.B.: Italian Painting 1250-1450 in the John G. Johnson collection and the Philadelphia Museum of Art, Phildelphia 2004, S. 122-123). As mentioned earlier, these interpretations of the adoration of the Child derive from a prototype by Fra Filippo Lippi. Until 1467 Domenico di Zanobi assisted Filippo Lippi (1406-1469) in his last creative period and therefore had access to his paintings. Other variations include the painting in the collection of Siverio in Florence and in Philadelphia as well as the one in Kinnard Castle in Brechin (Southesk collection), which is very similar to our one. Comparable is also a fresco depicting the birth of Christ by Alesso Baldovinetti, to be found in the Chiostrino dei Voti, Santissima Annunziata, Florence (1460-62), from which the artist took the idea of the red brick wall. Our painting can be dated just before 1470, a period in which the artist shows evident affinity with the works of Baldovinetti.
Anbetung des Kindes mit Hirten und Hl. Johannes d. Täufer.
Tempera auf Holz.
Unten links mit rotem Wachssiegel.
88,5 x 46,5 cm.