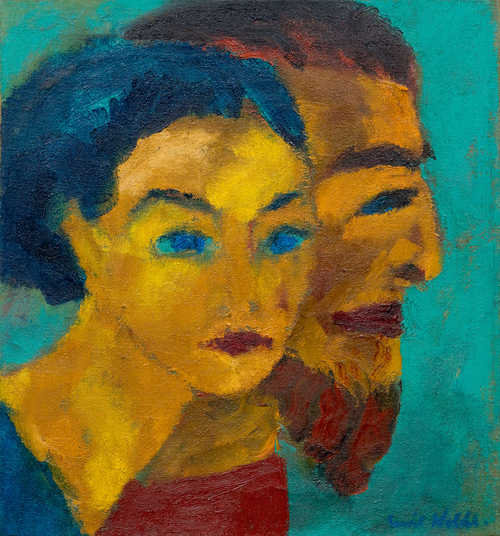 In addition to the landscapes of his North German, or Danish, homeland, portraits are the second major theme in the works of Emil Nolde. They not only occupy a large portion of his oeuvre, they also reflect the painter's special interest in the human soul. Nolde was not a portraitist in the classical sense of the word, but rather was in search of the psychological image of his counterparts, who were often friends and close relatives. He was also interested in Biblical and mythical themes, and a significant part of Nolde's figural representations are depictions of pairs. The Kunsthalle in Emden dedicated 2006/2007 to the theme of the exhibition “Emil Nolde - Paare” (Emil Nolde - Pairs), which showed many important works from the Nolde Stiftung, such as the work Bruder und Schwester (Brother and Sister), also painted in 1918.

In the early work of Nolde, the pairs are still placed as figures in a landscape. From 1910 onwards, Nolde took the decisive step towards focusing on the upper body and face of the sitters. Since the late Middle Ages, the half-length double portrait is the usual form of representation of married couples. Nolde's versions, however, are concerned with the depiction of the fundamental nature of various human attachments.

Nolde presents us with this double portrait of a man and a woman in warm and expressive tones, painted with thick and generous brushstrokes. The painter gives us no clue as to the identity of the pair or how they relate to one another. The individuals play no or only a minor role, just as in his mask pictures or the documentations of the South Pacific voyage he undertook with his wife Ada in 1913-14. Here, he is more concerned with the typification of the relationship between the two.

The sitters are very close together and compositionally blend into one another through the differing profile views. A magician of colour, Nolde paints the eyes of both in deep blue, the lips in strong red, the faces in streaks of yellows. Thus the essential unity of the two is emphasised through colour. Yet their differences are also expressed: the man is shown in side profile, the woman before him in three-quarter profile. They are looking in different directions. She is wearing blue, he red. As with most of Nolde's pictures of pairs, it is noticeable that he is consciously and very skilfully dealing with the ambiguity underlying the double portraits.

In his memoirs, Nolde himself said of his works, also very fitting to this Doppelbild:
"I cannot rewrite my pictures. In the painting itself is said what I could say. Only in general perhaps can I add a little. Duality had received a large space in my pictures and also in the graphic works. Together or against each other: man and woman, pleasure and sorrow, deity and devil. The colours were also contrasted: cold and warm, light and dark, dull and strong. Most of the time, however, after a colour or a harmony had been struck as if it were natural, one colour determined the other, quite emotionally and thoughtlessly touching into all the glorious colours of the palette, in pure sensual devotion and joy of creation. The form was nearly defined in a few structural lines before the colour had a further impact in shaping a secure sentiment. Colours, the material of the painter: colours in their own lives, weeping and laughing, dream and happiness, hot and holy, like love songs and eroticism, like songs and chorales! "(Nolde, Emil: Jahre der Kämpfe, Cologne 2002, p. 200).