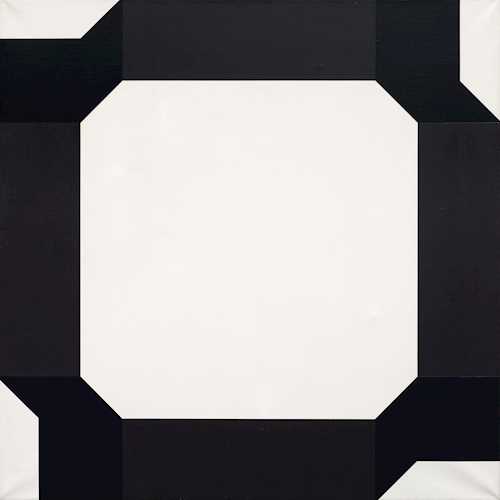 Imre Kocsis was born in 1937 in Karcag in Hungary. At the age of 21 he emigrated to Germany, where he completed his studies at the School of Fine Arts in Hamburg. At the same institution he then obtained a post as assistant. His first solo show took place in 1965 in Munich, where his works were presented at Galerie Leonhart, and later in Düsseldorf. A stay in New York in 1980 at P.S.1 took Kocsis and his works to America. At the same time, he was granted a guest studio at the Stedelijk Museum in Amsterdam. Kocsis enjoyed significant success with his exhibitions, including the Karl Ernst Osthaus Prize, which was awarded to him in 1989 by the city of Hagen. At the same time, he also worked as lecturer in the sculpture department at the School of Fine Arts in Reykjavik. After his death in 1991, a part of his estate was accepted into the Foundation for Concrete Art and Design in Ingolstadt in 2009.
Black and white are the colours that dominated Kocsis’s work throughout his artistic career. Over the 30 years of producing art he developed a simple and elegant concrete-constructive formal language. Characteristic of the artist are the play with various dimensions, not infrequently with the intention of creating an illusion. So, for example, he works with two-dimensional planes, as in the present piece "B. III. 76". Through the reduced range of colour and the arrangement of geometric forms, Kocsis creates depth within the painting. This spatial illusion is also present in his room-floor-wall objects, which are equally reduced to black and white. He adds black linear forms to a simple white room. Leaning against the wall or lying on the floor, these forms create a spatial illusion. In this way, the viewer, on entering the exhibition spaces, perceives varying perspectives. Thus, a constant interaction is formed between the viewer and the spatial construct, so that his exhibition is an active experience.