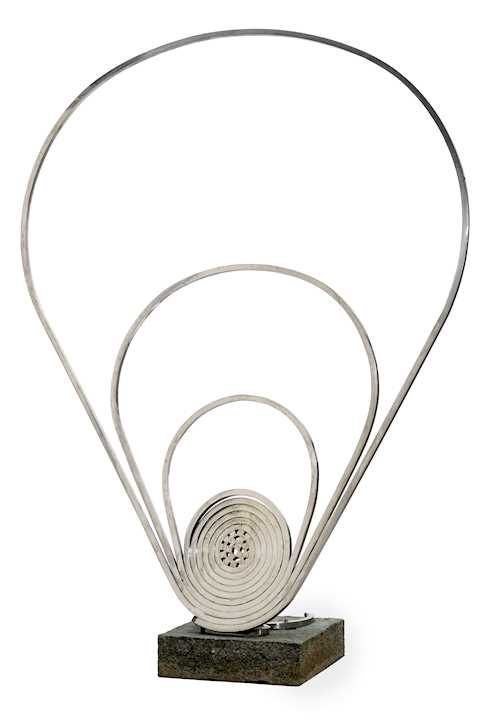 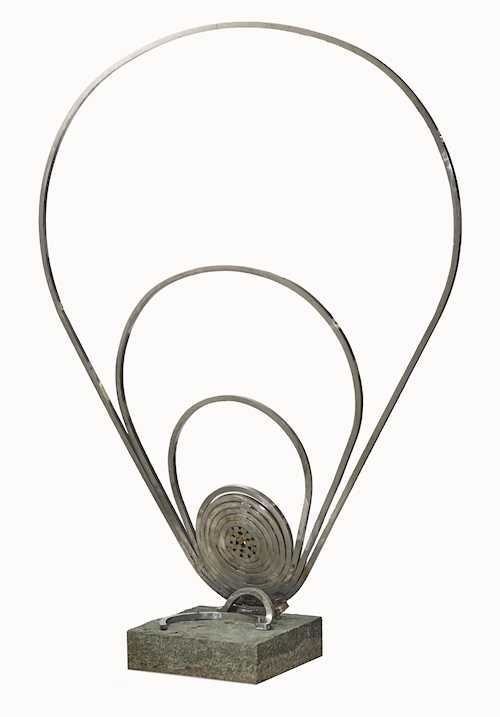 The craft of ironwork, as a passion and at the same time as inspiration for his life’s work can be understood as Martín Chirino’s constant companion. Born in 1925 in Las Palmas de Gran Canaria in the Canary Islands, as a youth Chirino spent his free time in the shipyard where his father worked. It is inconceivable that the young artist would have not taken the opportunity to travel to the African coast with his father on his numerous journeys. The influence of Africa can be seen later in his artistic work.

At the age of 23 Chirino moved to Madrid, where he studied at the Royal Academy of Fine Arts of San Fernando and graduated in 1952 with the title of professor. This was followed by trips to Paris, London, and Italy, where he immersed himself in the art of sculpture, and engaged with the great masters such as Henry Moore and Julio González. This was the basis of all his knowledge, which he put into practice after his return to the workshop in his homeland of the Canaries. In addition, Chirino shared his passion for the indigenous people of the Canaries and their inscriptions with his good friend the artist Manolo Millares. With him, he studied the writings of these people and their culture. So it is not surprising that in his work two elements – iron as a material and African culture – would merge.

Together with some other artists of the Canary Islands he decided to relocate to Madrid in 1955. In 1958 he joined the Spanish artist group El Paso, which included artists such as Antonio Saura, Manolo Millares and Luis Feito. Two years later, however, the group was disbanded. During the same period, Chirino had his first solo show at the Ateneo in Madrid, entitled Los Hierros de Chirino. In these works he continued to express his deep connection to his homeland, as well as to iron, the material with which he preferred to work. A further central element in his work came to the fore – the spiral. It began in the 1960s in an exhibition at the Museum of Modern Art in New York, with the work El Viento. A fine example of this can be seen in the work presented here. This piece represents a spiral which has been created by the wind. Thus, Chirino constantly pursues the goal of giving his work the highest degree of expression with a minimum of material.

His works were shown in numerous museums and galleries in the USA, as well as in Europe, which led him to relocate to the New York area. His work was finally honoured with a National Prize for sculpture in 1980 by the Ministry of Culture. Furthermore, he also presided over the cultural institution Círcolo de Bellas Artes in Madrid and some years later was a major contributor to the construction of the Atlantic Centre for Modern Art (CAAM) in Las Palmas. This contemporary art museum was conceived and then managed by him.

Martín Chirino’s work, bearing the stamp of his youth and his passion for the African people, was constantly shaped by new inspirations and influences from his travels and encounters. Yet during all this time he remained true to his origins, the Canary Islands. Not only did he open cultural institutions there but allowed many of his works to represent his homeland visually and thus enter into the public space.