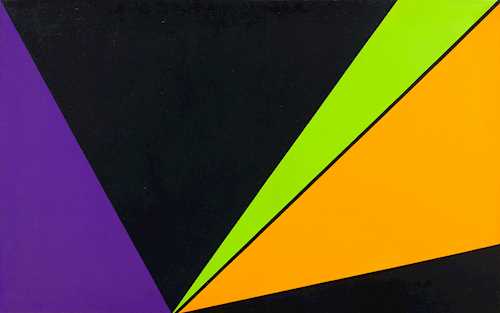 "Bærtling's system can be understood as a response to Mondrian, for every decision Bærtling makes is both a confirmation of and in opposition to that pioneer." Kay Heymer.

The Swedish painter Olle Bærtling was born in Halmstad in 1911. He was one of the most influential representatives of Concrete Art in Scandinavia.

At the beginning of his artistic career he was deeply rooted in Nordic expressive painting. His early paintings show the influence of Henri Matisse, even though Bærtling's works do not emulate the great emotionality of the French master, but are characterised by a certain distance within the representation. Between 1945 and 1948, this detachment led to more and more expressive figurative elements disappearing from his œuvre, and striking colour surfaces playing an increasingly important role in his compositions.

In the late 1940s, Bærtling's desire to work internationally took him time and again to Paris, where he worked first with André Lhote and then with Fernand Léger. While Lhote rejected Bærtling's artistic development towards abstraction, the positive interaction with Léger led the Swede to devote himself exclusively to non-representational painting from 1949 onwards. His encounter with Auguste Herbin and being accepted by Galerie Denise René, which at the time served as a platform for all the important abstract painters, provided him with additional orientation.

In 1954, Olle Bærtling found his definitive system, which underwent repeated adjustments, but in principle did not change. Two elements are crucial: the pictorial concept and the colour. While different geometric forms can still be found in the first abstract paintings, these have completely disappeared by 1954. His pictorial concept is composed of areas of colour, separated by black lines. These lines, which are always the same thickness and slightly curved, only cross at the edges of the picture. In this way, he creates an open composition without a pictorial centre, which is determined by directional impulses beyond the edge of the picture. This spatial effect is further enhanced by the fact that he hangs the works at some distance from the wall. A reduction in colour is also deployed and, unlike many fellow artists, he relies on secondary colours. While in the 1950s he still combined a wide variety of colours, in the 1960s Bærtling concentrated on black and violet, and in the 1970s he contrasted reds with purples.

The present work "Iraba" from 1962 is an outstanding example of his mature 1960s style. The extreme landscape format is dominated by the black and purple areas. The black contour lines meet at the lower edge of the picture, so that the directional impulses of the colour areas radiate out to all sides.

Despite many similarities with Piet Mondrian, Josef Albers, Victor Vasarely, but also Bridget Riley, Olle Bærtling, with his open composition and use of colour, succeeded spectacularly in developing his own recognisable signature style.