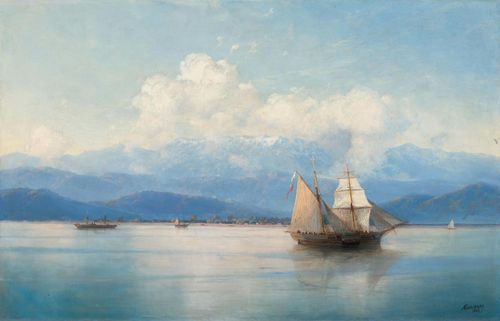 Aivasovsky may be said to represent the culmination of classical marine painting: the catalogue of his first major exhibition outside of Russia calls him a "virtuoso of the unbridled elements" in his descriptions of "troubled waters and storm-tossed clouds" ("Aiwasowsky. Der Maler des Meeres", catalogue of the exhibition at the Bank Austria Kunstforum Wien, 2011, p. 26). In fact, Aivasovsky's images of water, marvelously transparent and glowing from within, probably remain unsurpassed. Still, he was an exceptionally keen observer of his beloved sea, which lapped the shores of his native Crimea, and he knew its every mood. So there are, besides the turbulent cresting waves, "Paintings in which the skies are wide and high, at times feathered by clouds, then bathed in gold by a low-lying heavenly body; where the coasts widen into sweeping bays, which offer the cities and ports lovely and favourable situations, where the gentle sea waves lift tall ships looming dramatically over the horizon; (...) a picturesque ritual of conjuring, (...) as if he wanted to elevate the peace encompassing nature as well as culture to a universal potentiality." (see p. 32). The evocation of peace through painting: a wonderful subtitle for our "Ships off the Caucasian Coast", with which the artist gives us a panoramic vision of the majestic peaks of the Caucasus, that mountain range about 1100 km in length and 5642 meters high, which divides the Black Sea from the Caspian Sea. Numerous military conflicts between Russia, the Caucasian mountain peoples and the Ottoman Empire were seen in this strategically important area during the lifetime of the painter; so the storm clouds that swell upwards over the snow-capped peaks may have had not only a decorative function, but a symbolic meaning for the artist. Directly before the viewer, as wide as the mountains and divided from them only by a narrow coastline, lies the calm sea like liquid silver: shimmering, luminescent, smooth as glass. Four ships - two facing right, two left -hovering over the water. The largest, probably a Schooner brig (or Brigantine) deployed as a coastal freighter, at the right of the picture, has hoisted behind the main mast and on the so-called "Gaffel" projecting upwards obliquely left, a white-blue-red flag. It is the flag of the Russian Empire, which was declared the official flag of Russia in 1883, just a few years before the creation of this painting. Many meanings have been ascribed to the colours: such as white for freedom, blue for the Mother of God, and red for the power of the czar. The unity of the East Slavic peoples, shaped by romantic-nationalist movements in the 19th century, has also been associated with this tricolour. Further to the left a ship can be seen in the background with two small chimneys discharging smoke that billows into the sky; it is steam-powered: a muted comment from the otherwise quite conservative Aivasovsky on the emerging and future industrialisation of his homeland. So "nature and culture in the haze of late afternoon light are brought together in harmony. A strange beauty envelops everything in a radiant glow, which answers the longing and the visual hunger of the viewer with peace. There are (...) grandiose idylls, spun from light. A quiet farewell to the Premodern era."